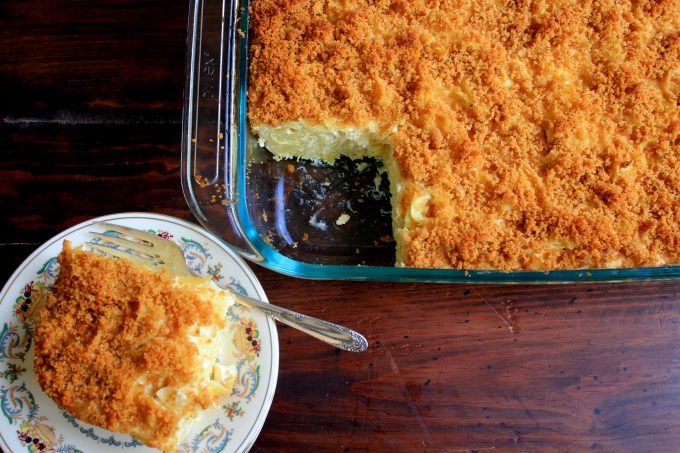 This is the noodle kugel your Bubbe made, if your history is thusly inclined. (And if it is not then the combination of the words kugel and Bubbe in one sentence may have sounded quite peculiar to you). Suffice it to say this is the stuff of Jewish grandmothers: a noodle “pudding” that is really a baked noodle casserole, bound by as much dairy and love as you could possibly whirl together and pack between noodles in your baking dish.

There are three types of Bubbes in this world: the ones who top their kugel with sweet graham crackers, those who make a crunchy cornflake crust and then those (few) who do not make kugel at all. (I do not judge the non-makers harshly, though: perhaps they take their little ones on great imaginary mathematical adventures,  or teach them to handily whomp opponents at gin rummy.)

Someday I will be both Bubbe #1 and Bubbe #2. The third type of Bubbe is out of my realm: I will never see math as a wonderful adventure and I will certainly not ever recover from the ease and speed with which my mother and grandmother ended our card games.

This recipe is for my inner Bubbe #1. To be clear, I have no intention of becoming a grandmother any time soon– for one thing, I (and my children) are far too young. For another, I had to say that, because my kids are reading this. No, I am offering this recipe for all those Bubbes-in-training, ranging in age from 12 to 95, both male and female, who would like to be able to throw together a killer noodle kugel.

Make this to break-the-fast, or to serve at a brunch   (I did not just say that, kids.)  To some it is a side dish, perfectly at home with fried chicken or at a barbecue, and to others it is dessert. However and whenever you serve it, this is sweet, rich, creamy noodles, and that’s plenty good enough for me.