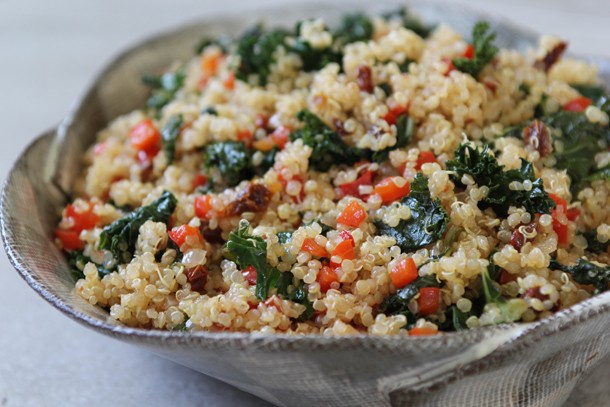 We once believed following a low fat diet would make us healthier and thinner. People who ate diets nearly free of butter, bacon, olive oil and even avocados shrunk their waistlines and lowered their cholesterol. They were living, lithe proof it was true.

All kinds of recipes and foods were created around the belief that a low fat = dietary nirvana: the panacea that would make us healthier, stronger, more attractive and all around more perfect. We created brownies using pureed prune, white “cream” sauces made with gums and stabilizers and low fat cookies so intensely sweet you barely noticed the strange texture. We put up with the fake food in honor of our health. The food wasn’t satisfying, but one has to make sacrifices, right?

That was the 90s and we’ve gotten a lot smarter since then. We now know fat can be good, too much sodium is bad, we are all vitamin D deficient and gluten makes us feel bloated.

Gluten is the new food demon. At any given cocktail party, you hear conversations about how much better people feel now that they live gluten free. The tales of glorious weight loss and newly discovered vitality—especially coming from people who had previously consumed processed carbs with pleasure-induced abandon—make a lot of sense. For the many of us who love our pasta and bread too much, reducing* our gluten intake is probably a very good thing.

An entire industry has grown around gluten free versions of foods made with gluten. Sound familiar? In the grocery store baking aisle, you will find gluten free bread, cracker and crust mixes. Gluten replacement products are a fast-growing sector of food manufacturing. Any day now, our cereal aisles will sport gluten free fruit loops.

As we all jump on the GF bandwagon, might I suggest we learn from our past and approach these replacement products made with modified potato starch and xantham gum with some care and moderation? Perhaps replacing one set of highly processed foods with another is not a solution. Let’s stick with and enjoy foods that are naturally gluten free—there are thousands of them. Most, like the Quinoa with Kale below, are foods we would choose to eat for pleasure, not because of a dietary restriction.

The quinoa keeps well for 2 days in the refrigerator. To make a complete meal, toss in edamame or toasted pecans or other nuts or leftover cooked chicken.

1. Bring 2 cups water to a boil in a medium saucepan; stir in the quinoa, reduce heat to simmer, cover and cook 15 minutes or until the water is absorbed.

2. Heat 1 tablespoon of the oil in a large nonstick skillet over medium high. Add the shallots and cook, stirring occasionally, 2 minutes. Add the red pepper and cook another 2 minutes. Stir in the sherry vinegar and kale (in batches, if necessary) and cook, tossing occasionally, until the kale is bright green and just tender, about 6 minutes.

3. Gently stir the sun dried tomatoes and salt in with the quinoa; toss with the kale mixture and the remaining 1 tablespoon olive oil and serve warm or at room temperature.

* Obviously, anyone with Celiac disease should truly eliminate gluten (wheat, barley and rye) from her or his diet. Those of us who simply over-indulge or  have some sensitivity might benefit by cutting back.