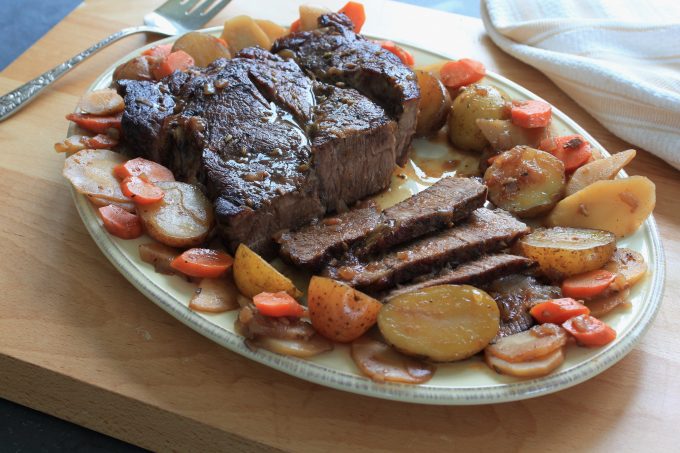 It was raining: a  cold, gray sheet of prickling pins, flashing in the street lamps like shards of metal. At 11.30 on a Tuesday night I was heading to my car after teaching, and lower Manhattan was quiet. The few people on the street had their heads tucked down, hands stuffed in pockets, and they were moving quickly.

I am still slow: my limp, the result of a recent surgery, is worse at night, and certainly after standing for seven hours. I thought about my students: their warmth, interest and pleasure made me forget about the damp cold. But nothing could block the throb of my ankle. I went back to my students: as is so often the case, they talked about how cooking a big meal on Sunday gave them leftovers to use throughout the week. The conversation naturally led to pot roast.

A gravelly voice interrupted my thoughts. I looked towards the bench, where a big man fronted by a snarly mass of gray beard sat beneath a cleverly crafted cardboard overhang, his leg projecting out onto the sidewalk and his arm resting on the handle of an overstuffed shopping cart draped with plastic.

I looked at his leg encased in the kind of bulky medical boot I’d been wearing for six months. I tried not to breathe in his powerful stench through my nose.

“How are you doing, Sir?” I asked, nodding toward his leg.

“One day at a time. That’s all you can do. I’m doing alright. And next week I’ll be better than today. So will you. Now, though, you gotta get on home.” I thanked him and wished him well.

On my drive, I thought again about pot roast, and wished I could offer him a heaping plate of warm meat. He was right: in a matter of months I would be pain- and limp-free again. I hoped the same was true for him.

The next week I packed up leftovers from class and looked for him on the way out. His bench was occupied by two men and a woman who were talking loudly and gesturing wildly: they were hopped up on something fast. I looked past them, into the dark park toward the water, but my friend was gone.

Perhaps I should have given the food to the three rowdy bench dwellers, but I was a little afraid of their erraticism– and more than that, I was annoyed at them for taking the place of a kind man: a man who, despite seemingly rough circumstances, not only looked toward better days ahead, but generously offered a perfect stranger his encouragement.