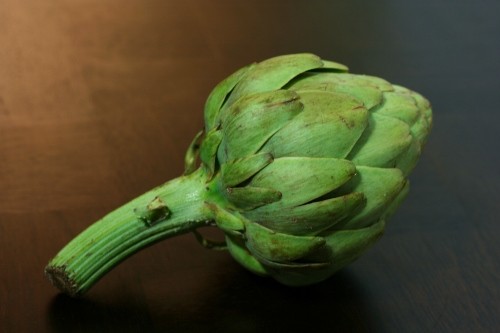 You have to wonder about the first person who discovered artichokes were edible. Given that they grow in a mild climate in rich soil, chances are the first nibble wasn’t out of desperation—many other more obviously edible plants grow in the same environment. As beautiful as artichokes are (they were part of the “floral” decorations on tables at my wedding), they just don’t have that “come eat me” look and vibe.

Most of the artichokes grown in the US are from Castroville, California, where Marilyn Monroe was once crowned Artichoke Queen. Given the artichoke’s long standing reputation as an aphrodisiac, (dating back to ancient Greece and Rome) it seems Marilyn was a wise choice. I like to think Catherine De Medici, who is credited with bringing fame and a randy reputation to the artichoke in 16th century France, would have approved.

Okay, enough history, even if it is (nearly) about sex Let’s go to the grocery store, where you’ll want to choose an artichoke that feels relatively heavy for its size and is tightly closed. It may be conical or round, and when you press two leaves back and forth against each other, if the artichoke is fresh the leaves will squeak. Seriously.

The easiest way to cook an artichoke is to boil it. But first, you’ll need to trim it. Cut off the stem and the top 1/2-inch or so (those leaves will be sharp and tough). 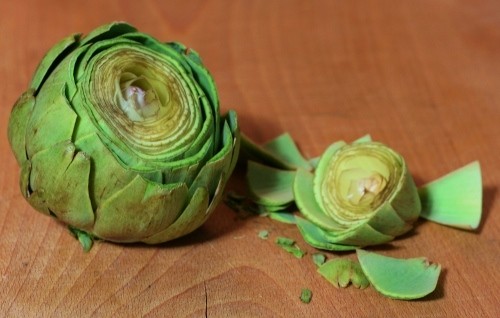 Pull off the tough leaves near the bottom, and use scissors to snip off the top point of the remaining outer leaves. 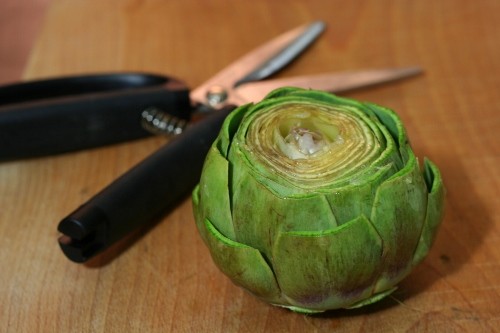 Use the tip of your knife to score an x in the bottom of the stem. 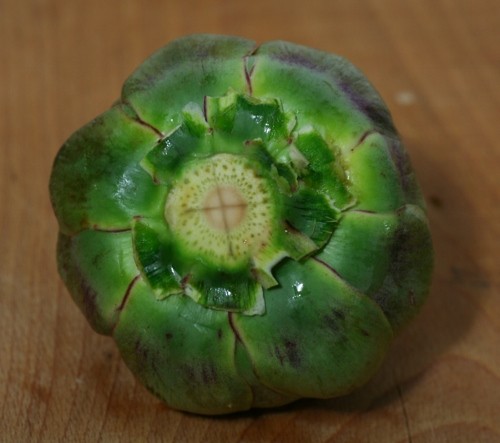 Place in a pot with enough water to come about halfway up the  side of the artichokes and bring to a boil. Immediately reduce the heat, cover and simmer until the artichoke is tender– usually between 20 and 35 minutes, depending on size. Try pulling out a leaf; it should come off easily. And if you prick a fork into the center, it will be tender, the way a baked potato is.

There are two ways to remove the choke. One is to eat your way toward it, leaf by leaf, until it is fully exposed. Many people like to dip their leaves into something before scraping their teeth along the inside to get the meat. Below is a very simple dip, made of just mayonnaise, lemon juice, minced red onion and capers. But I urge you not to get too fancy with your artichoke dip—you want it to enhance, not mask, the artichoke flavor.

After you’ve made your way through all those leaves, you’ll get to the choke. You can also remove the choke early on, by spreading the leaves apart like this. 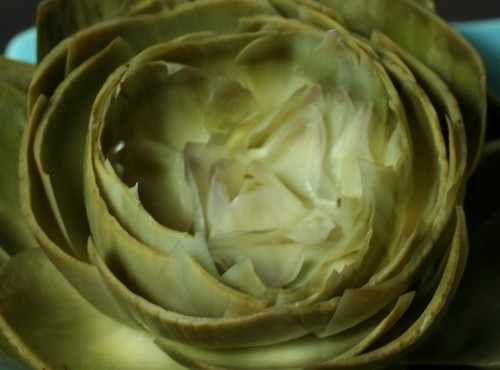 Either way, all you have to do is scoop out the hair-like choke in the center, which sits above the prize of your journey, the artichoke heart. 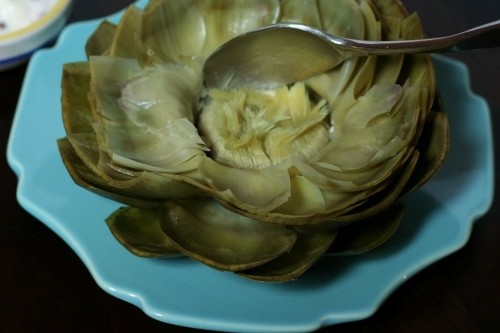 In the photo below, it is very obvious the artichoke and sunflower are closely related. This is what it looks like with part of the choke removed: 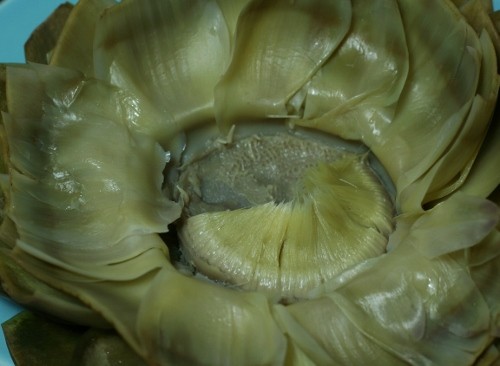 And this is what it looks like when you convince yourself no one will notice if you take just one little leaf (for sustenance!) before you continue photographing… 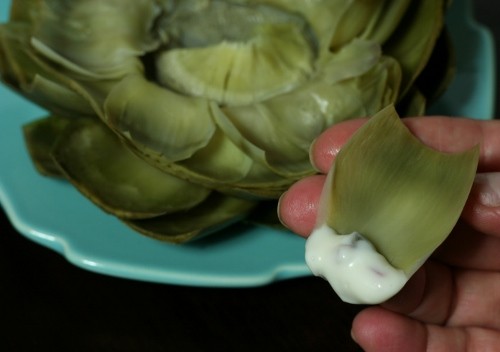 Previous Post: « Passover Chicken Soup with Matzo Balls, or: A Tale of Two Generations
Next Post: Stovetop Brisket for Passover and Easter, or: Why My Daughter is Not a Vegetarian »