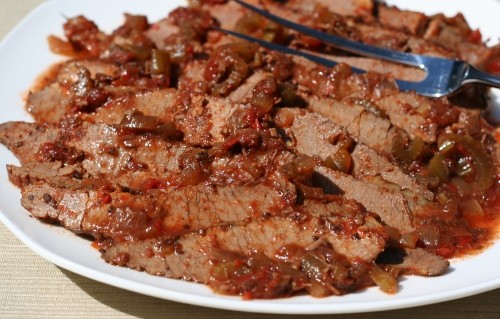 My daughter went through that phase that has nearly become a rite of passage for teenage girls: she flirted with becoming a vegetarian. It was just after a dreary winter; tiny round buds had formed at the ends of tree branches and bright green shoots peaked up from the ground. Ever the naturalist, perhaps it was the pleasure Rachel was taking in all things growing and thriving that made her want to shy away from eating foods that had to be killed.  She says now she just didn’t like the taste of meat, but I remember conversations filled with conscientious objecting. I also remember a lot of the cool girls were “going vegetarian”.

About a week after she stopped eating all ‘foods with faces’, I began my Passover and Easter preparations. As Rachel sat in her bedroom doing her homework, the house filled with the aroma of my slow cooking brisket. And that, to paraphrase Gladys Knight, proved to be too much for the girl.

I am grateful that the bad economy brought Rachel back home after college. (That, and being accepted into a very competitive graduate school program. Oh, did that just happen to slip into this conversation?) I have an extra year or two with her—years I consider a gift. I am trying to put the time to good use in many ways, including in the kitchen. When she is interested (thankfully often), I show her how to make the kinds of dishes a daughter should learn from her mother: family food and  holiday traditions. She knows how to cook and she has seen me make certain dishes hundreds of times, but now she pays attention to the details that make this brisket, this chicken soup, this carrot cake, ours. Mine and hers.

1. Combine the paprika, oregano, salt and pepper on a large plate. Sprinkle evenly over the entire surface of the meat.

2. Heat a Dutch oven over medium-high heat. Add the brisket and cook until browned, about 8 minutes, turning once. Add the celery and onion and cook, stirring, 2 minutes. Add the water, reduce heat to medium-low, cover and simmer 3 hours.

3. Stir in the crushed tomatoes and cook until tender, 1 hour longer. Transfer the brisket to a cutting board and let stand 5-10 minutes. Cut the brisket across the grain into 1/8-inch to 1/4-inch thick slices. Return the sliced meat to the Dutch oven and gently simmer, uncovered, over medium heat until the brisket is very tender and the sauce has thickened a bit, about 1 hour longer. (Do not skip this last step)

Previous Post: « How to Buy, Cook and Eat an Artichoke
Next Post: How to Choose and Use the Kitchen Knives You Really Need Part 1: The Chef’s Knife »