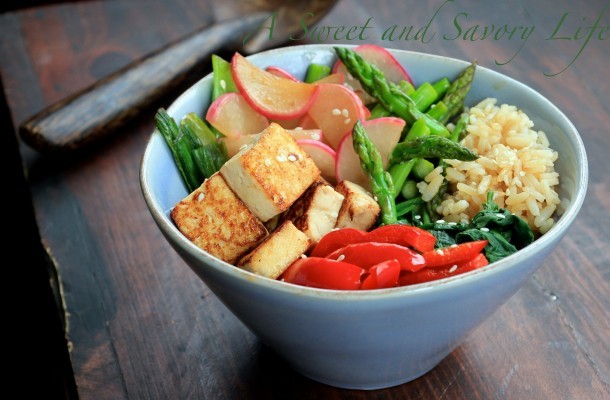 We’ve been cooking together for a long time now– over 19 years, I think. But he’s still the new guy to me, and as much as we can finish each other sentences, sometimes we surprise each other.

I am not surprised that after I had ankle surgery last month, he took such good care of me. I knew he would. I am a little surprised that I don’t mind it more– in fact, he better be careful or I will start feigning all kinds of disability just to get waited on like this. But I don’t have to fake anything right now: I truly can’t make myself lunch or get a glass of iced tea. Crutches make that impossible, but fortunately, there is bottled water, which can be transported without splashing.

I can’t cook. It’s like an itch I can’t scratch. But the really cool thing about having cooked with someone for nearly two decades, day in and day out, is that when he cooks a dish I have conceptualized, it’s just what I envision– and often better. When I told him my idea for my weekly Newsday column was a Buddha bowl with seared cubes of tofu and asparagus, spinach, quick cooking brown rice, and red peppers with a simple soy and rice vinegar sauce, I knew he would get it. But then he made it even better, adding radishes (because he knows how much I love them) and scallions, and giving my simple sauce character and depth with just enough honey and sesame oil.

He breathed life into my idea and turned it in something tangible, nourishing, and better than I could have done on my own. And all the while, he made sure I was sitting with my leg elevated.