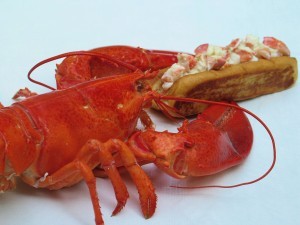 I feel like I’m lying to you. Every time I refer to my husband as “David” I feel like I’m writing about some foreign creature—or at least someone else’s life.

These are the only conditions under which I call my husband David:

When I first met “David” I was on a press trip to Orlando, Florida sponsored by Red Lobster. Yes, that Red Lobster: the largest seafood chain in the world, best known for piles of  fried seafood barely discernible under layers of batter and butter. (The chain has made enormous strides since then and actually offers some healthy choices; more on that in a post to come).

Despite all that fat and so little flavor, Red Lobster gave a mean press trip. We did vertical tastings of crab, lobster and shrimp and learned how each is harvested in different parts of the world. Oh, and I learned this: we can now buy mechanically peeled, deveined shrimp in the grocery stores thanks to Red Lobster. As the world’s largest single buyer of shrimp, it was worth their while to pay for the development of equipment that could efficiently –- and ultimately inexpensively—peel and devein vast quantities of shrimp. Once the equipment was developed for them, it was only a matter of time before other, smaller companies could reproduce the idea to scale.

So yes, I got a lot out of my time at Seafood University. I brought each of my children a little stuffed red lobster- and a week later, a new friend named David.

My Nearly Perfect Daughter and Exceedingly Charming Son were 8 and 6 respectively, and they were stunned when they saw a tall, shaved-head, goateed and hip-looking guy come through the back gate. Exceedingly Charming Son claims little memory of anything besides the enormous clear bag of Lego-shaped candy the dude with the gleaming head was carrying. I remember that candy (and the chocolate-dipped strawberries he brought to our first date). Red Lobster might call the ensuing few weeks a Family Love Fest™.

There was one small glitch in those initial weeks, but the kids fixed it seconds after it arose. I was in the kitchen  making dinner, the kids were at the table playing, and David went out to the pantry to get something. I remembered I needed another ingredient while he was there and called to him: “Hey, David…”.  The kids froze. Their father, who had left recently, was named David. Hearing me call his name from the kitchen…Well, it didn’t work for their little psyches, so they immediately gave this new David a new name. He became The Extremely Bald One. That soon became too cumbersome and they made it “E.B.O.” Soon, even saying the three letters was too much, and his name became Ebo. By the time my family and friends met him, this man was known by the three of us only as Ebo. As he shall now be known to you…

A truly great lobster roll should profess undying gratitude to its raison d’être: the lobster. In other words, don’t muck it up by adding lots of seasoning, too much mayo or all kinds of crazy ingredients. Keep it simple: the cooled lobster meet should barely glance at the mayo, not drown in it. The best roll to use is top split, which makes it harder for the lobster to escape the bread (which means more makes it into your mouth). Lightly toasting that bun gives you all the textural contrast you need.

2. Transfer the lobster to a clean bowl and stir in the mayonnaise and pepper; mix well.

3. Heat a large skillet over medium heat. Brush the insides and the sides of the hot dog buns with the butter. Open the rolls and place them cut side down in the skillet, in batches if necessary; cook 1-2 minutes, or until lightly golden. Turn the rolls over and cook 1-2 minutes longer.

4. Fill each bun with 1/2 cup of the lobster mixture and serve immediately.

Previous Post: « It’s Not You, It’s Me. Really.
Next Post: Hogs and Beef for Butcher Geeks (and two brisket recipes) »