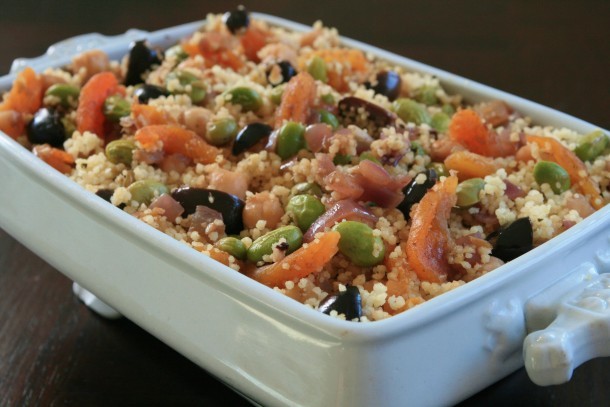 I used to call it the curse of the teenage vegetarian. I’m sure you’ve known someone in this position. One kid or spouse is all about lamb chops and porterhouse steaks and the other(s) won’t eat anything with eyes except potatoes. Don’t go getting all huffy with me– I am not saying vegetarianism is a curse; rather, trying to feed a mixed clan is a royal pain in the neck. The problem often arrives in households with teenage girls who, like their friends, decide to eschew “meat”. (There are often varying definitions of meat.)

When my daughter decided to become a vegetarian who ate brisket and my son toyed with the idea of becoming a pastaterian, I did what any sanity-loving mother in my position would do. I simply cooked dinner and anyone who didn’t want it could make themselves a grilled cheese sandwich. I believe many teenage vegetarians will choose ease of food supply over their newly discovered disgust for consuming animal proteins. Also, I was making it relatively easy for them to explore their inner vegetarian– if this was something they truly believed in, I was sure they would be willing to make themselves a sandwich to keep it going.

On the other hand, as a parent I wanted to support their exploration and curiosity about all things healthful (or at least not harmful or illegal), so I would also make double-duty dishes that, like this, can serve as a side dish to a simple baked or grilled fish or chicken or as a main dish, thanks to the protein provided by chickpeas and edamame.

Serve sautéed spinach along side both, and to pump up the protein for the plant eater, add slivered almonds to the greens.

The couscous also makes a terrific portable lunch. Large lettuce leaves can serve as wraps to eat it burrito style. (Don’t assemble them in advance; they are unlikely to hold well unless you go to the trouble of steaming the leaves.)

Despite the long ingredients list, this dish comes together very quickly and easily.