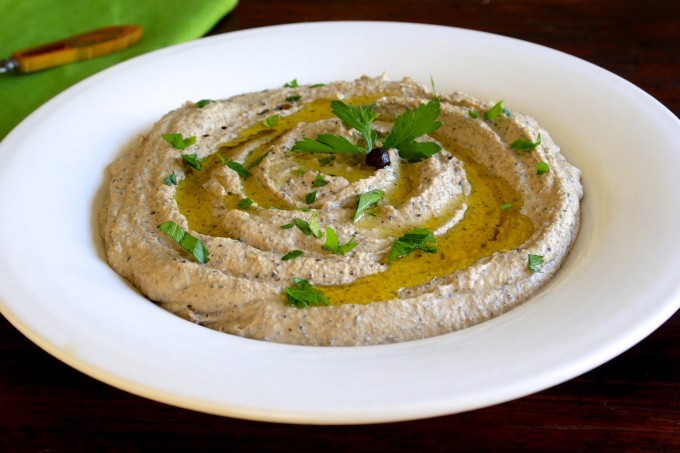 While working on a story for Fine Cooking magazine* we “called in” product from some growers. (That means we called the growers and asked them to send us product for testing and developing). Tucked in the box from Timeless Food, having nothing to do with the story, was a bag of black chickpeas.

I had never seen them before. When raw, they are like tiny gleaming onyx stones with a little peak on top, like the kiss of a chocolate morsel. A couple of cracked peas revealed an interior similar in color, though more yellow, than ordinary chickpeas.  I soaked them overnight, as I would any chickpea, and in the morning they were slightly expanded and, thanks to the glistening surface of the water, looked even more jewel-like.

After simmering the soaked beans for nearly 2 hours (longer than most chickpeas), they were tender inside, although the skins are someone chewier, and don’t easily slip off the way they do on other chickpeas. I wondered if they would add an unpleasant texture to hummus.

Black Chickpea Hummus is decidedly different from regular hummus: it is nuttier, earthier, and more coarse. It somehow seems a little heartier. As you can see from the photo above, the hummus is not dark black like the exterior of the pea; the color is more like a milk chocolate shake with little bits of shaved chocolate mixed in.

* Here’s a story I wrote in the April ’16 issue of Fine Cooking  about a real passion of mine, Israeli Style Hummus

* Here is my basic recipe for really good, Authentic Hummus