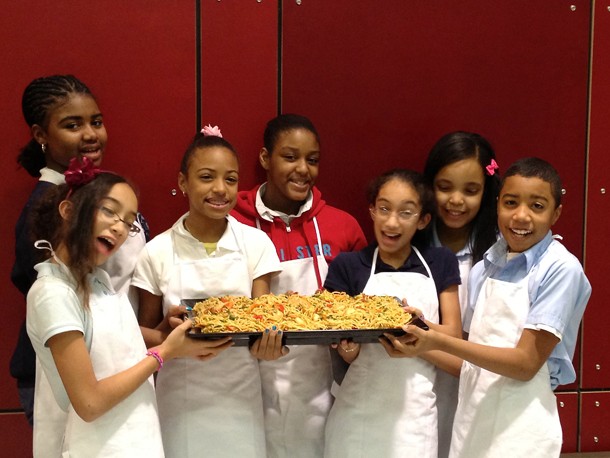 When my mother really, really liked something, she’d say it was “over the rainbow”. (If it was something she loved to eat, she would say “over the moon”.) I think she got the expression from the song “Somewhere Over the Rainbow” from the Wizard of Oz.

I want to tell you about something that puts me over the rainbow. Last November, I started a cooking program for ‘tweens at the Kips Bay Boys and Girls Club in the Bronx. Before I could actually teach, we had some pretty thorny logistics to work out.We didn’t have a real kitchen, and we didn’t have a stove or oven. We had no equipment– not a single skillet or spatula.

Some people are very, very good at the “Ask”. They may be fundraisers (professionally or personally) or sales people or a whole lot of other professions I am not. (Which is a good thing, because my kids and I would have starved if we depended on my halting, stammering Ask.) But all I had at Kips Bay was an empty room with a sink and some cabinets. If I wanted the program to work, I’d have to Ask for things. I emailed my friends at two companies, Anolon and Oxo to find out if they had any returned or obsolete equipment they would be willing to donate.

Within ten minutes my friend at Anolon told me she had brand new sets of pots and pans (the same ones I use at home!) she would send and wanted to know what else I needed. Shortly thereafter, Oxo told me to send a wish list. You know when something good happens and it feels like your insides just swell up and you get a big goofy smile and you want to hug all of humanity? Yeah, that’s how it was.

That was before I even met the kids.

I’ll get to them in a minute. Shortly after the program began, I got an email from a friend of mine, Beth Poole, who is the Executive Director of the Copper River Marketing Association in Alaska.  When we were in Cordova in the fall (cooking for the mushroom festival), we had brunch with one of the fishermen on the board of the organization, and he asked me all kinds of questions about the Kips Bay program. After the program began, they sent me an entire case of canned wild Copper River salmon. It turned out to be the kids’ second favorite class. (Their first favorite was when we made Christmas cookies. Nothing can compete with making cookies, even if they are no-bake cookies because you don’t have an oven.* The kids decorated take-out Chinese food containers with appliques donated by my good friend Vivien Siegel, filled them with the cookies , and gave them as gifts.)

Here’s the amazing thing about these kids. They are game for anything. Even when they were first learning to use 8-inch chef’s knives and went through a bunch of band-aids, they persevered. Even when we were cooking foods they were sure they wouldn’t like, they tried at least a little taste. They came to the class each week full of enthusiasm, curiousity and willingness to learn.

Sometimes, because they are between 11 and 13 years old, they also brought drama, goofiness, eye rolling, ants in their pants and a whole lot more. But then we would begin, and it all fell away. Over the weeks, their inner talents emerged. There is Danae, whose artistry made our food look so beautiful; Atalaya, the organized leader; Gian, our master mincer who hyper-focusses until the job is perfect; Nathalia, her quiet intellect soaking up the information; Dai’lynda, who happily volunteers to help with any and all tasks… the list goes on. Cooking helped their inherent talents blossom.

Last night we had our graduation class, the last of eight Level 1 classes. To celebrate, the kids made Peanut Noodles with Shrimp. Look at this dish– the kids cut and cooked every vegetable, made the sauce and sautéed the shrimp. (The only thing I did was cook the noodles in advance, and that was simply to save time).  They used an Oxo julienne peeler (a tool I love) to make the carrots and zucchini look so great, and cut the red pepper strips with their chef’s knives. 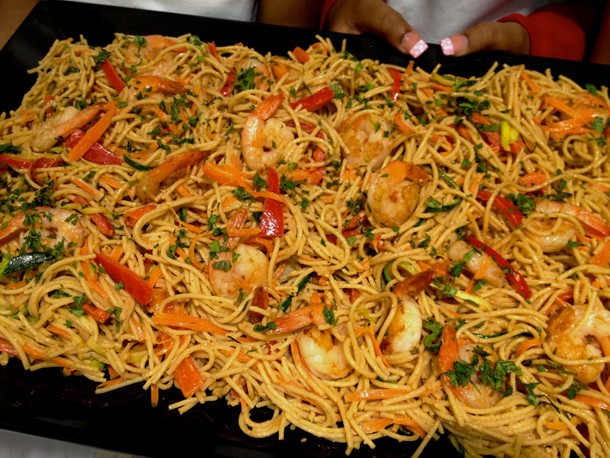 Here are some of the kids in their graduation toques. 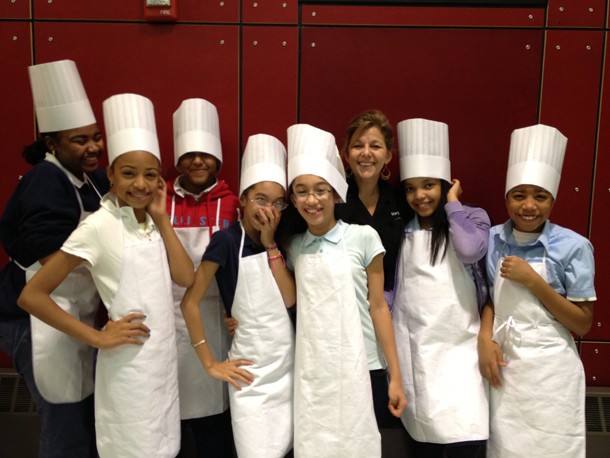 I was just over the rainbow with pride and pleasure. 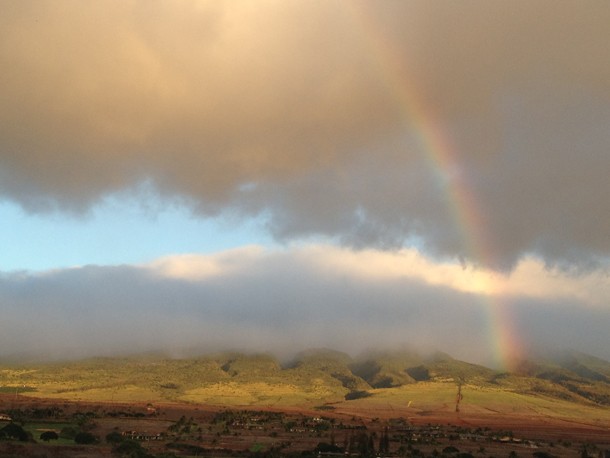 Below is my recipe for Peanut Noodles and Shrimp. (We changed the vegetables slightly: the kids julienned zucchini and carrots and sautéed them with them red pepper.)

2 carrots, shredded with a vegetable peeler

*Anyone out there have an extra oven hanging around?