In the end, I am glad we made the irrational decision to cook a five-course meal for ninety guests at the Fungus Festival in Cordova, Alaska.

Cordova is a place of rugged, real beauty; it makes pretty tropical islands look like giggly platinum blonds. In Cordova, people talk about getting their moose, secret berry patches, dyeing yarns from foraged plants and, most important of all, how the salmon are running. Cordova is filled with commercial fishermen and their boats. But not with commercial kitchens.

And that is what makes my tale balmy.

This was our second visit to Cordova. I went the first time as a reporter/writer; I returned as a chef to cook at my husband’s side for the Fungus Festival, which was held in the Pioneer Igloo. While not made of ice, the building has withstood eighty five winters in Cordova and is scheduled for a much-needed renovation—later. We were told the kitchen there was not adequate for all our prep: we’d use a restaurant kitchen for that and switch over the morning of the event. The week before we left for Alaska, we learned the restaurant kitchen was no longer available. We would be working in a kitchen in a church basement and would move to the Pioneer Igloo on Saturday for final-hours heating, cooking and plating.

The church kitchen was big and clean.  When we got our quick look at it the day we arrived, we were told we needed an Alaska Food Handler’s license. So at 7am the next morning, Ebo and I took the tests, and can now proudly claim to be Alaskan certified. Are you impressed? 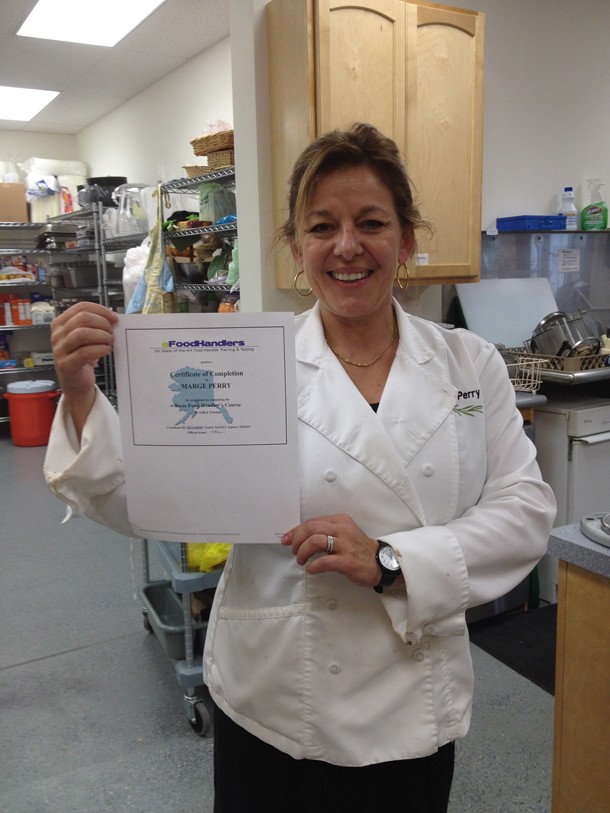 We had lots of local folks volunteering. But we didn’t have commercial equipment—just two ordinary ranges each with four burners; two ovens, one of which took an hour to preheat; one refrigerator and a smattering of every day home-kitchen sized pots and pans. Hey, the counter space was good. And we brought our knives, which were nice and sharp.

Cooking the meal was the easy part. Ebo (aka Chef David Bonom, aka, my husband) could do it in his sleep. With one hand tied behind his back. And a toothache. But it wasn’t about that: it was all about the logistics.

Here’s the thing about Cordovians (or is it about fishermen?): they are used to adverse conditions. (They tunneled each other out of their homes in last winter’s twenty-four feet of snow. That is not a typo: twenty-four feet.) They figure out how to work around challenging environments. Our Cordovian volunteer helpers were a culinary dream team. It wasn’t that they were the best chefs in the universe –I leave that title to my husband. It was their creativity, incredible work ethic, and ability to see every logistical challenge as just a little bump in the road that thrilled me to the core. It helped a whole lot that they also knew their way around kitchens.

Jen Pickett, a fisherman and writer, and Beth Poole, who runs the Copper River/Prince William Sound non-profit marketing organization, cooked and peeled ninety hard boiled eggs. (Beth’s beau, Jeremy, is a chef who made the best salmon chowder I have ever tasted. I am trying to get us the recipe.) 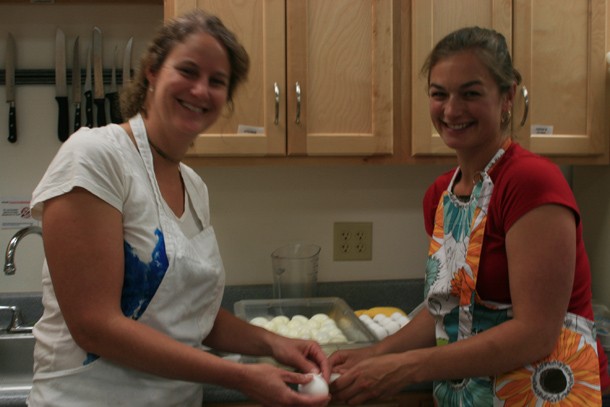 The two ladies in the photo below made an incredible (and fun) team: Amy O’Neill Houck, book author, pattern designer and writer of the blog The Hook and I;  and Erica Thompson, a deep sea diver (for sea cucumbers, I believe), while getting her masters while cultivating future environmentalists as an education specialist at the Prince William Sound Science Center…while starting her every day by drinking green slime (I don’t know why she did that, but if it makes her who she is, then I say, All Power to the Green Slime!) 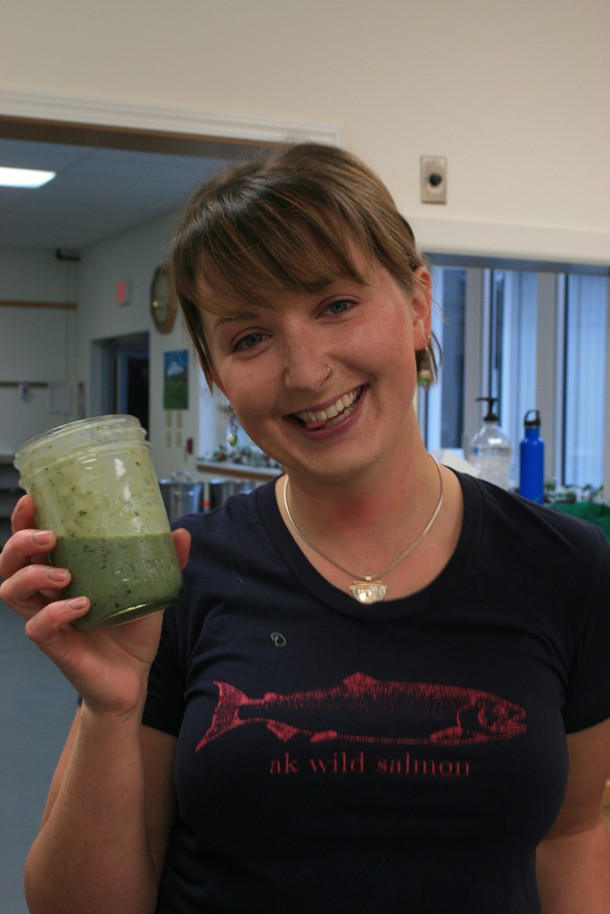 While Ebo whipped up the food fantastic and charmed (?) them all with his patter, I organized. And made dessert. And sautéed mushrooms. And moved ninety boiled eggs in basins of water around. And showed our crew how to do various tasks. Occasionally, I would whirl like a dervish around the kitchen in search of equipment that wasn’t there, and the team would magically find it in someone’s home, or a nearby restaurant—somewhere.

We worked with an incredible array and quantity of mushrooms. The mushrooms in the opening photo of this post were foraged locally, but the rest were brought in.

We sautéd maitake and put them in the salad… 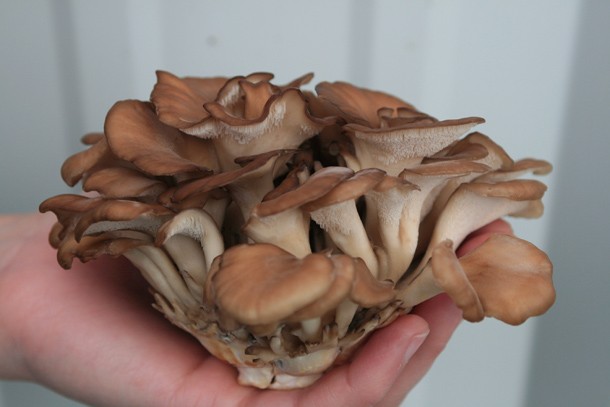 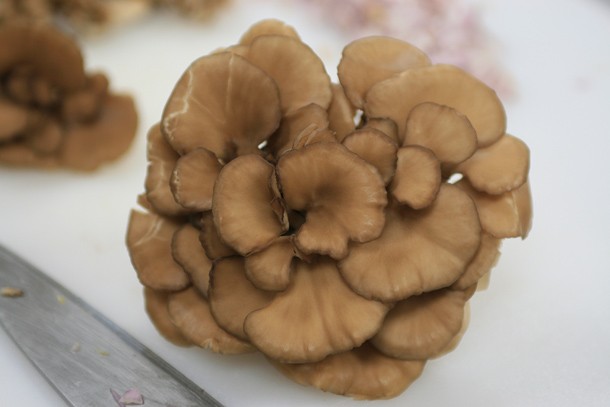 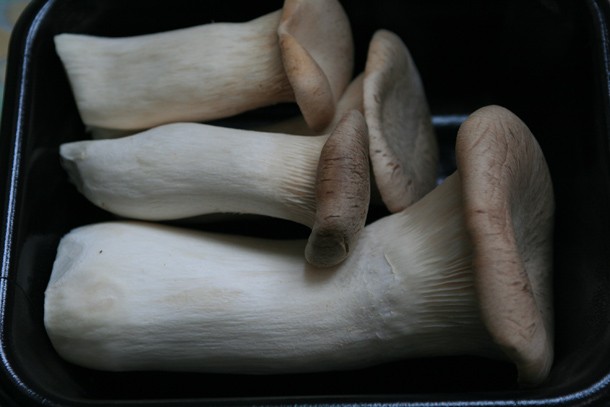 …which we sliced, sautéd and added to the lamb ragout and focaccia 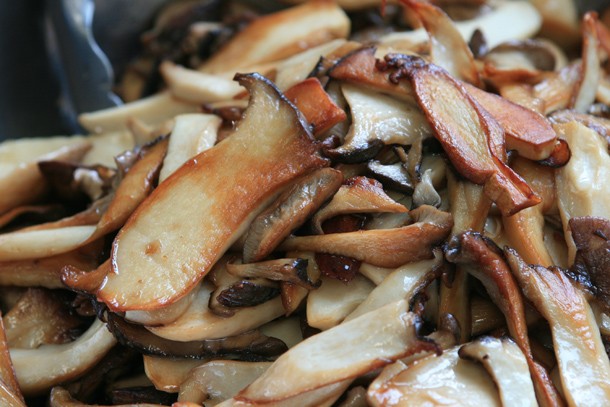 But we didn’t just prep mushrooms. There were the slow roasted tomatoes which took two valuable hours of oven time and might have been our undoing– had it not been for wonderful Mikal Berry, who brought trays upon trays to her kitchen to slow roast. Mikal often came to our rescue. Mikal is a former fisherman (by this I mean she went out for days at a time on a fishing boat and caught salmon, which is brutally hard physical labor) with a fascinating history of involvement in many other industries. Most recently, she had a food truck with a beautiful blue-green mermaid painted on the side and lots of idle equipment. Oh thank you, Goddess Mikal, whose bounty of pots and pans saved our dinner!  And when the ferry crash meant that we wouldn’t get our delivery of mascarpone, Mikal created a worthy replacement by combining one part butter with four parts cream cheese: 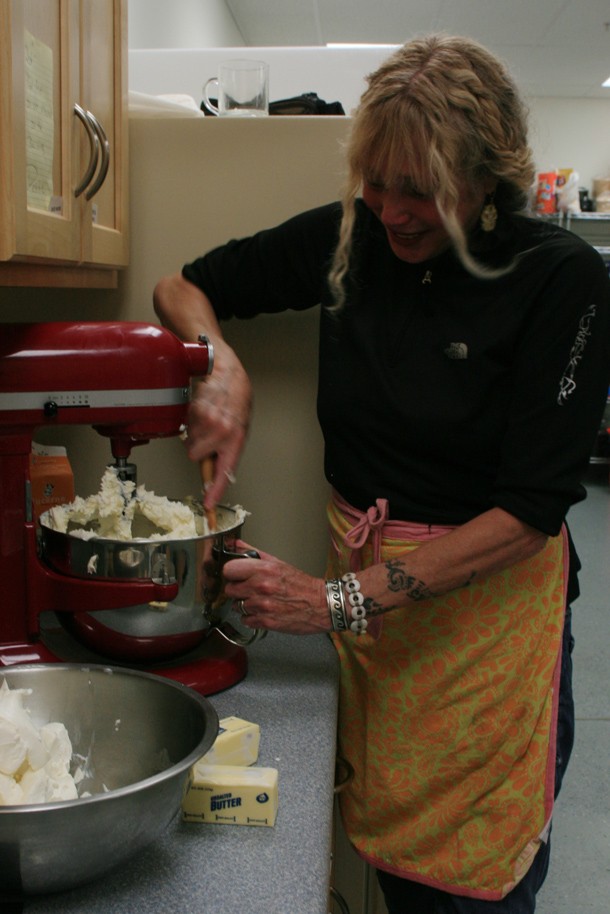 After two days that started at 8 am and ended at 11.30pm (with short breaks for dinner, which included a pot luck supper and moose alfredo) and involved as much maneuvering as they did cooking, it was time to move to the Pioneer Igloo. Our transportation crew had to lug all our partially prepped food and equipment up here: 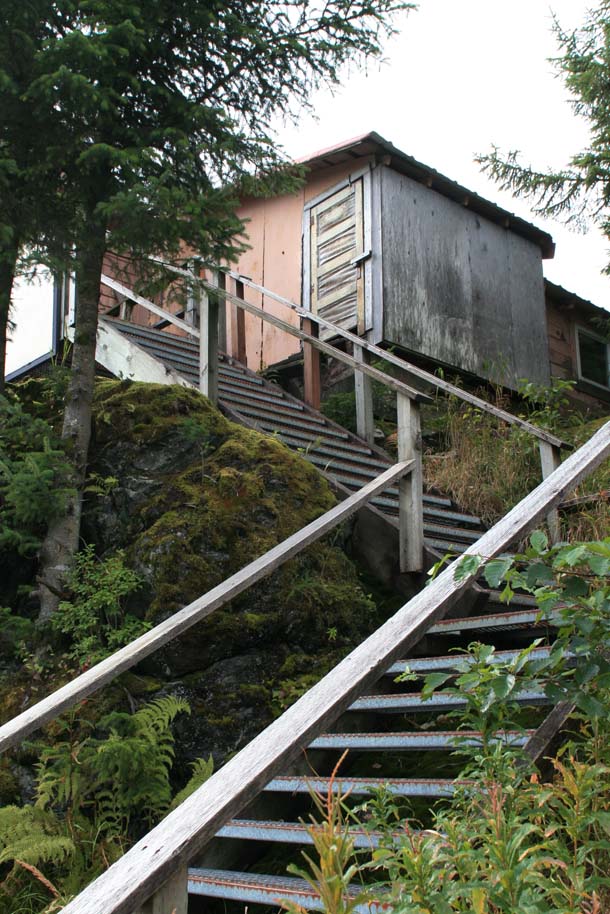 Or, to look at it from another point of view, down here: 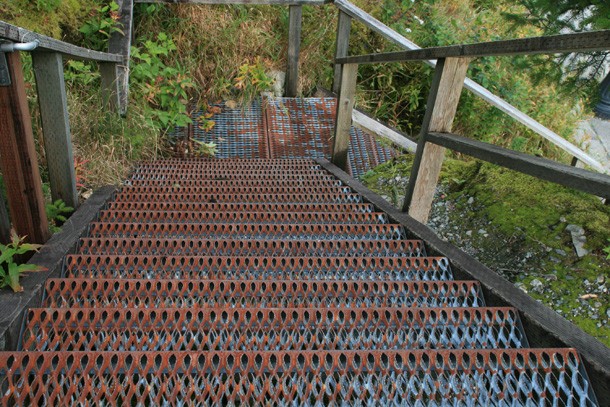 This is the reception area: 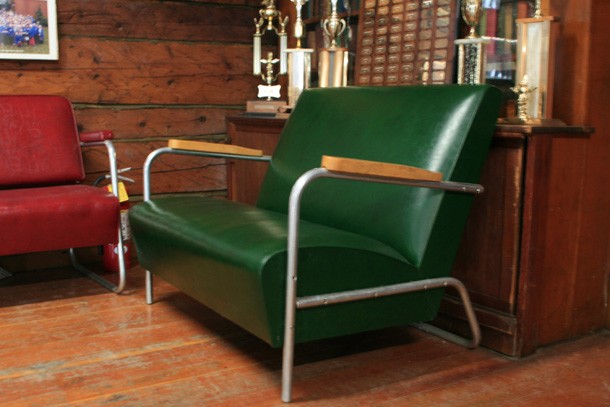 This is some of the wall art in the reception area: 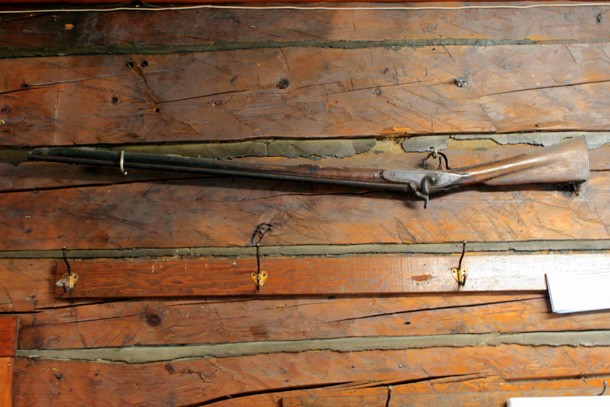 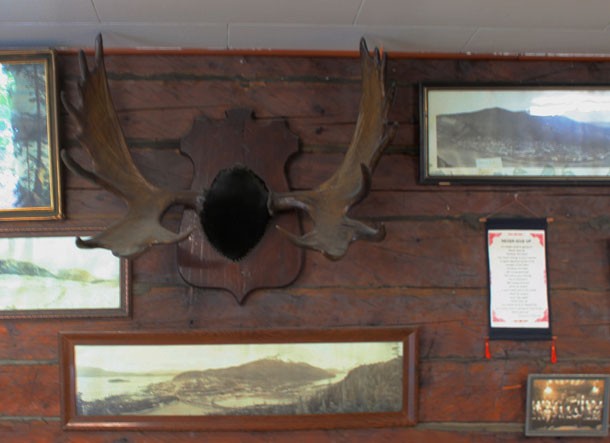 This is the view into the kitchen from the reception “hall”. 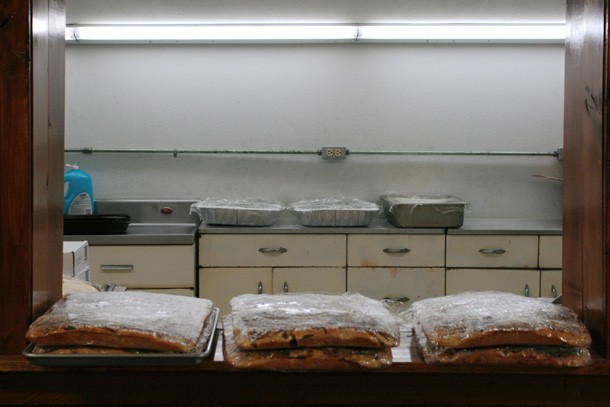 And now, if I may please have a drum roll, I would like you to see the kitchen from which we finished and served these ninety dinners. Here we are, a few hours before the dinner. 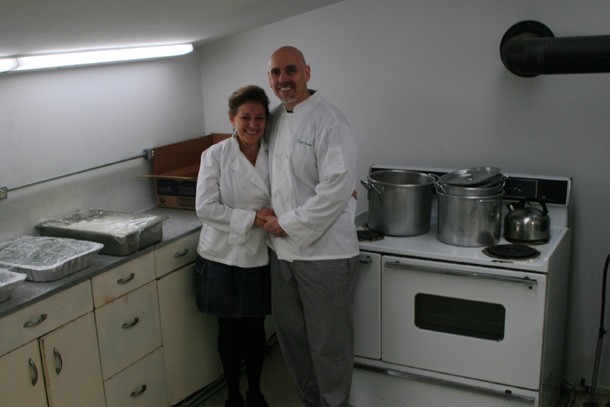 My favorite piece of equipment in this kitchen is this warmer that was fully functional. How beautiful is this?! 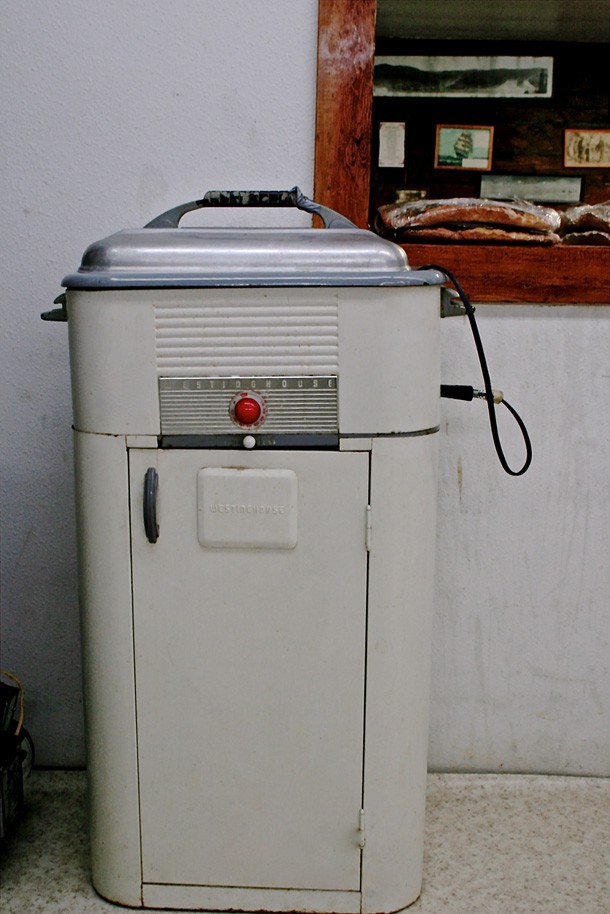 I also loved the china closet/pantry and the Pioneer dishes: 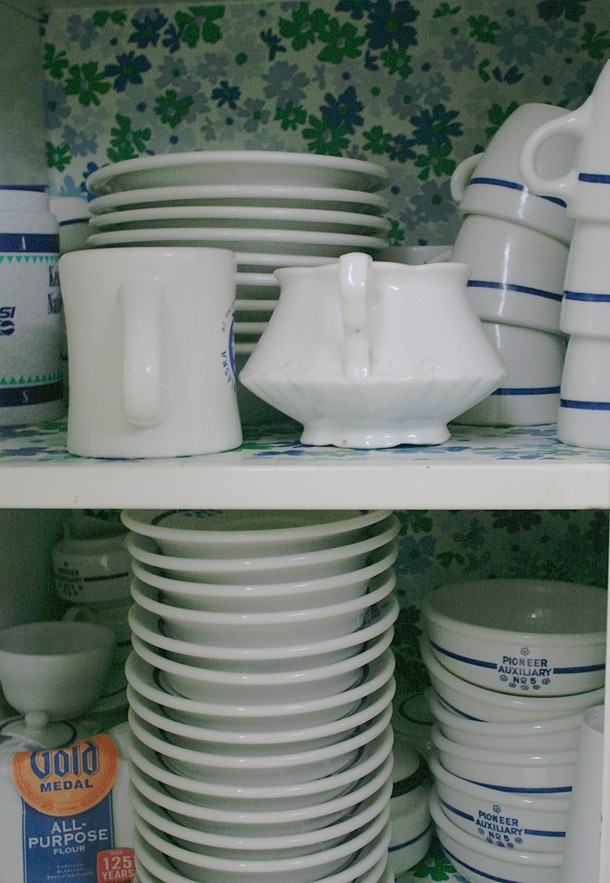 This is the dining room: 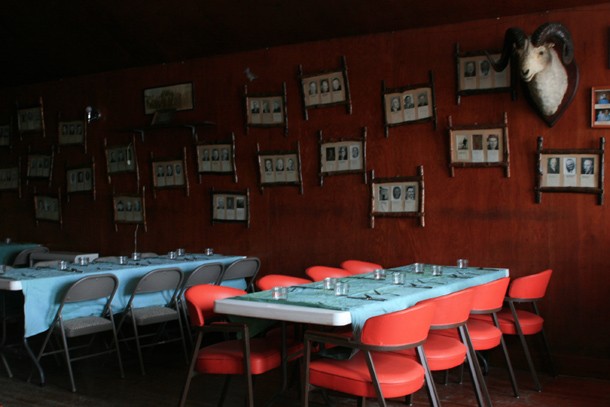 And here, at long last, is the meal we served to guests at the Fungus festival in Cordova, Alaska. 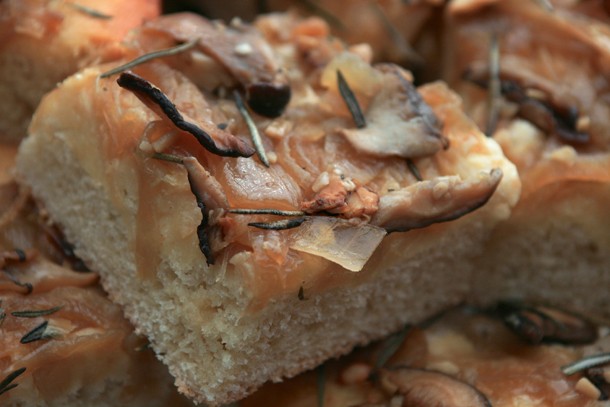 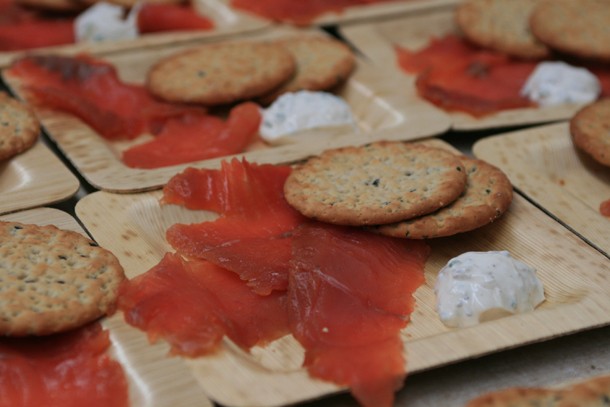 Frisee Salad a la Allard with Lardons, Maitake and Egg and Shallot-Dijon Vinaigrette 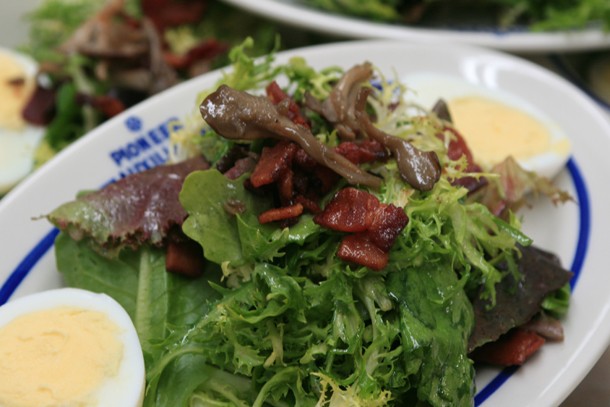 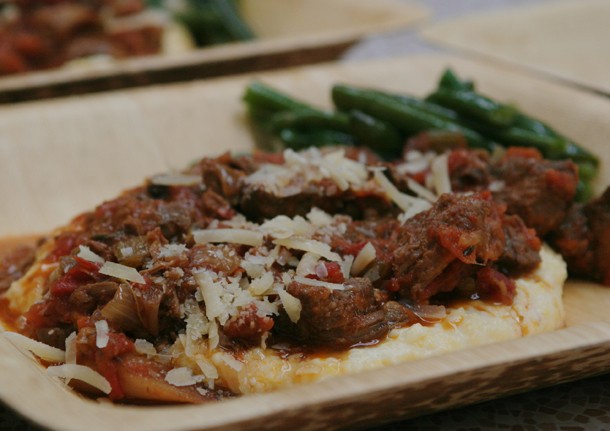 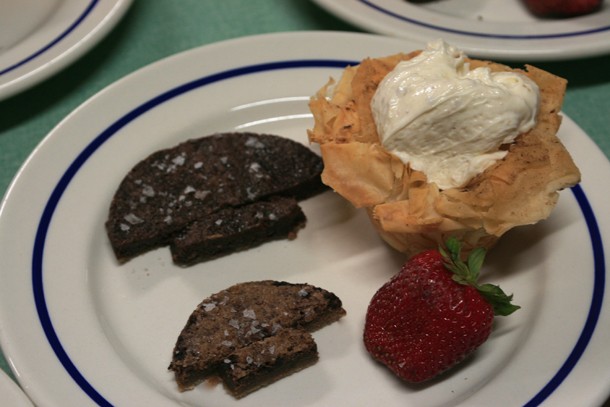 After the meal was served, there was an auction of many beautiful handcrafted mushroom-related items, including a silk mushroom-dyed gold robe, exquisitely hand painted by our Forest Service host, Erin Cooper. King-Chef Ebo was asked to model it to the guests, and he obliged, which helped it fetch a pretty penny. Here we are, hugging up (or holding each other up?) after a long night in the kitchen. 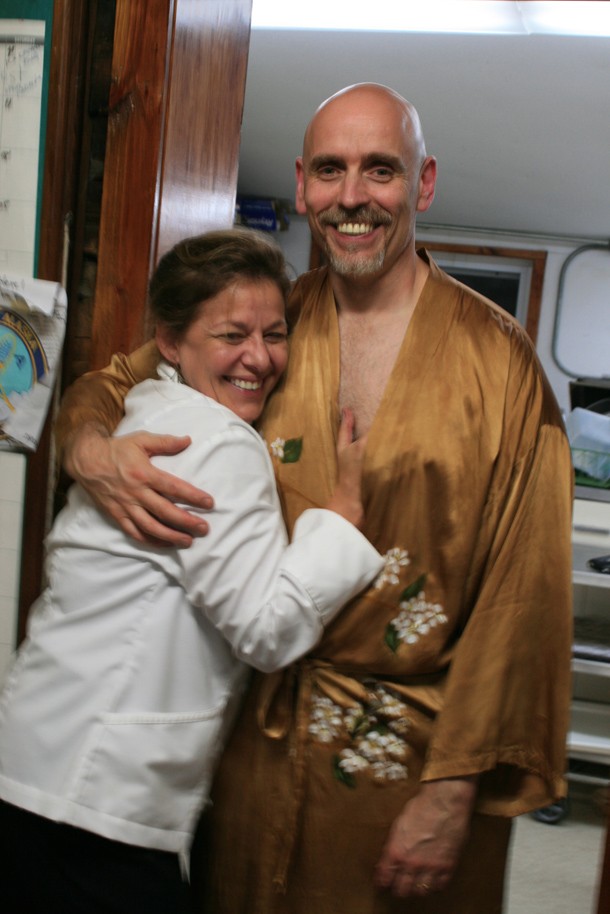 Post script: We left Cordova far richer than we came. Not only did we make great new friends and spend time with old ones, we brought home two cuts of Erin’s freshly hunted moose. For those of you who wonder, moose is not at all gamey tasting: it is quite mild and fairly similar to beef. And the talented Tanya, who brought french press coffee to our kitchen each morning, gave me a gold mushroom-dyed scarf that is as beautiful as it is filled with fond memories of the Fungus Festival in Cordova, Alaska.