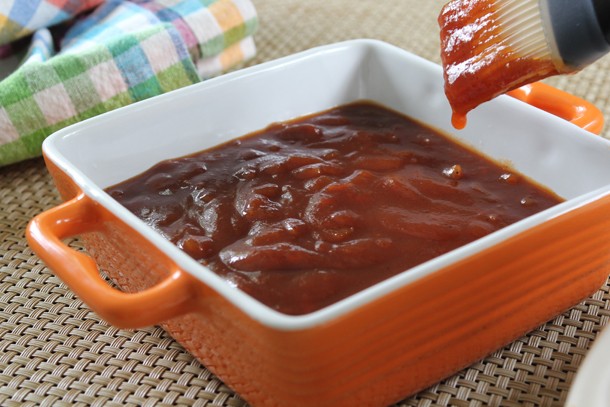 Cola is fairly commonly found in Southern barbecue sauces; it lends a deep caramel flavor. Most barbecue sauces — North, South, East or West– have some kind of sweet element in them, be it brown sugar, maple syrup, honey, plain old granulated sugar– or cola. But cherry cola just takes it to a very special place in barbecue nirvana.

Don’t fret about cola and it’s atrocious health offenses:  one can has the equivalent of about a quarter cup of sugar. If you think about drinking cans of cola, that is scary– but when you think about it as an ingredient in a sauce, it isn’t nearly so awful. And, oh my! What a yummy sauce it makes. Slather it on chicken thighs or burgers; brush it over ribs or skirt steak.  Make it as spicy or mild as you like…but make it.

Brush it on in the last ten minutes or so of grilling*–  much before that and the sauce is likely to burn.

*Or, if it is too hot out, crank up the air conditioning and roast chicken thighs in the oven. In that case, the sauce can go on about 15 minutes before the chicken is finished cooking.