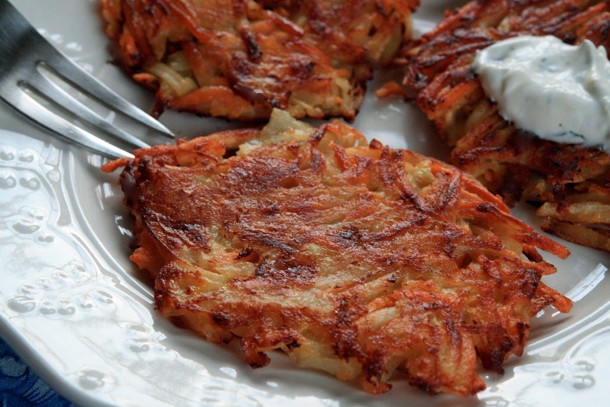 While there are slight variations from recipe to recipe, the basic idea behind making latkes is pretty much the same: grate potatoes, add egg and flour or matzah meal and fry the patties in oil.

You can add grated apple, zucchini, sweet potato, parsnip  or carrot to the grated potato (or a whole lot of other fruits and vegetables), but the idea is still the same. The big debate is usually how fine to grate the potato: I prefer shredded, though some like the more dense latke that comes from finely grated potato.

The question I am asked more than any other when it comes to latkes is: How can I make them ahead?

The absolute purist would say you can’t. And I agree (as would anyone, I am sure!) that a latke is at its best just out of the fry pan. But frying is messy and requires the cook’s complete attention– which means you can’t enjoy a room full of latke-eaters if you’re the cook. (Also, if you dress at all nicely for the room full of latke-eaters, you are bound to get oil splatters on your nice sweater.)

There are a few ways around all this. First, you can do what I did and marry a man who will fry the latkes while you host the party. Or, you can grate the potatoes hours ahead and store them submerged in water in the refrigerator. Drain them well  and make the batter up to two hours ahead. (It doesn’t matter if it discolors– when you fry them the latkes turn a beautiful golden brown). Fry the latkes no more than an hour or two ahead of serving. You can warm them by placing the latkes in a single layer on a sheet pan in a very low (200 F) oven. If they stay there too long, they will no longer be as crisp, but they will still be very appealing. The proof is that they will disappear from the platters as quickly as you can set them out.

1. Cut the  potatoes and onion lengthwise in pieces that fit through the chute of the food processor. Using the shredding blade, grate the vegetables together.

2. Beat the eggs lightly with a fork in a large bowl. Add the shredded vegetables, salt and flour and toss well.

3. Heat 2 tablespoons of oil in large nonstick skillet over medium heat. Use a 1/3-cup measure to scoop shredded potato mixture into 5 patties in pan, spreading each to about 3 inches in diameter. Cook until golden brown on undersides, about 3 to 4 minutes; turn and cook until again golden brown, about another 3 minutes. Repeat, adding no more than 2 tablespoons of oil for each batch, until all the potato mixture is cooked.