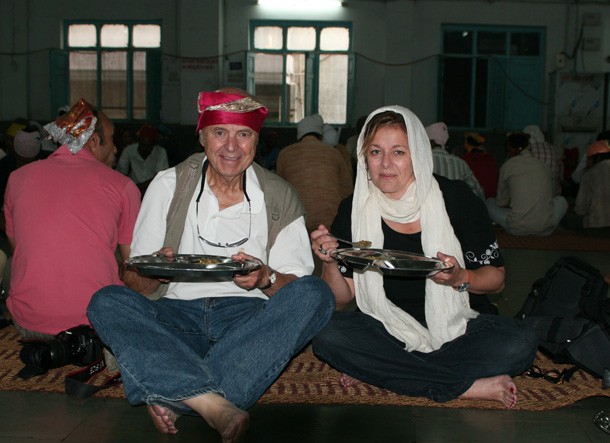 We had many good meals in India, my father and I. Every single one of them—truly every single one— included laughter and interesting conversation, and 98% included tasty vittles. (The missing two percent is thanks to a stop at a roadside tourist hall, the sort of place where big white busses full of Americans and Germans pull up, happy to order from a menu full of Anglicized dishes with wan and muddled flavors.) Even my father, who was sure he could never eat or enjoy anything made with chilies, and who, before the trip, was steadfast in his dislike of highly seasoned Indian food, enjoyed nearly every dish he ate, including a few that packed some heat.

But no single meal we ate in fifteen days could live up to one my Dad and I shared with several hundred people at the Sikh temple in Delhi.

I first visited the famous Sikh temple the day before my father arrived.  With my head covered, I removed my shoes and checked them with the volunteers– wealthy merchants or rickshaw drivers who work side-by-side throughout the temple. Seva, or selfless service, is one of the three fundamental principles of Sikhism.

To enter the temple, you first walk through a shallow water bath to remove the dust from your feet. As they enter the temple, many Sikhs will touch this water and then their foreheads– some even take a sip. My understanding* is that that they believe the water contains the dust of the holy; anyone who enters the Sikh temple is, by definition, holy. As much as my Western upbringing cringed at the idea of drinking water through which so many dirty feet have walked, I saw the equalizing beauty of the act. My guide explained that no Sikh has become sick from drinking the water because belief is more powerful than the body.

There are, I believe, two reasons Sikhs attend temple barefoot. One is that doing so keeps the temple floor clean. (Cleanliness figures prominently into the Sikh religion.) Perhaps more importantly, going barefoot allows the thousands of nerve endings in the feet to receive the energy from the Temple.

I toured the temple, fascinated by the chanting and full of questions about the many customs I witnessed. On my way out, a man spooned a dollop of “pudding” called karah parshad (made from whole flour, ghee and raw sugar) into my cupped hands. The exact same pudding is served to everyone at every Sikh temple in the world: it is a sign of equality and unity.

But karash parshad is not the “very best food in India” to which the title refers. That came with my second visit nearly two weeks later, which I made with my Dad.

After we listened to the beautiful chanting and watched people pray, we made our way toward the community kitchen. We passed a room where men, women and children prepared thousands of chapatti (bread). 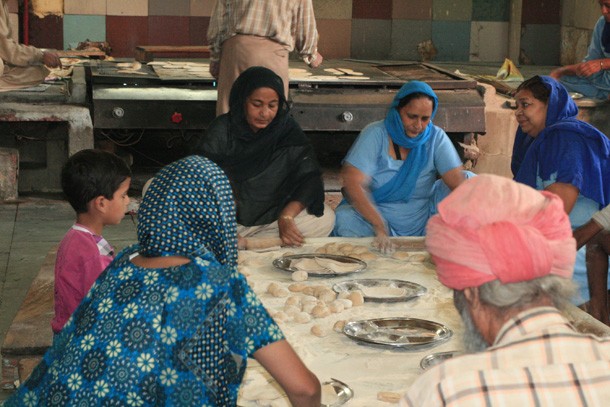 On the other side, vegetables were peeled and chopped 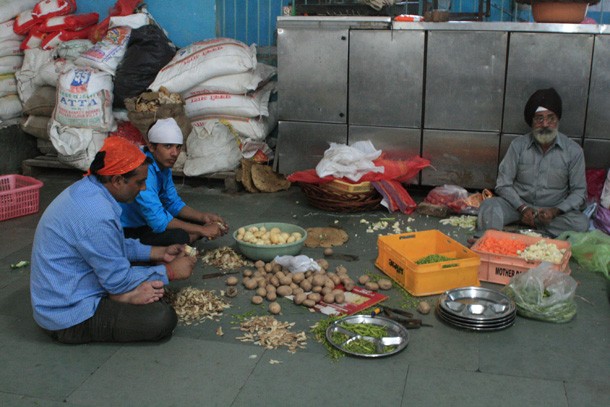 Here, a man oversees the vats of cooking lentils 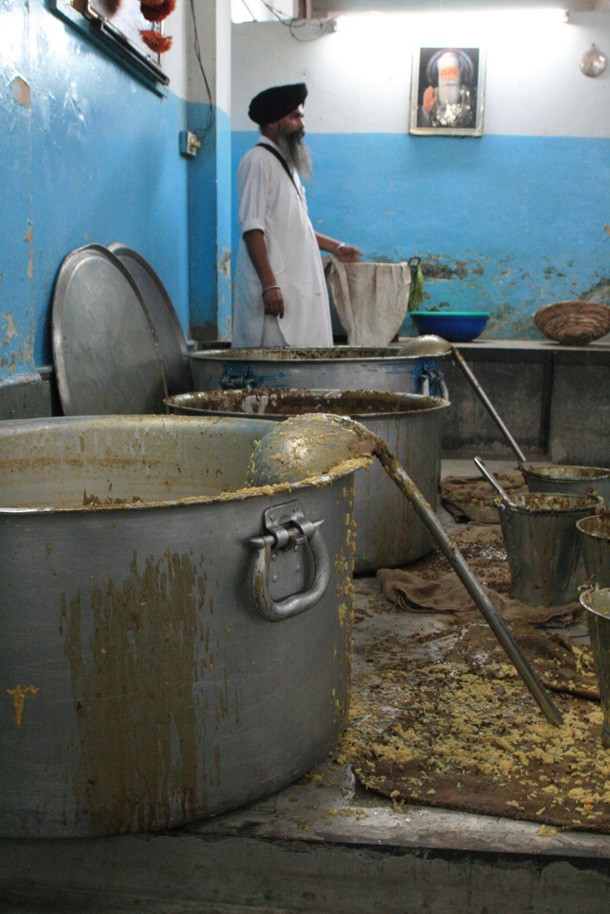 Yet another volunteer spoons the lentils into carrying buckets 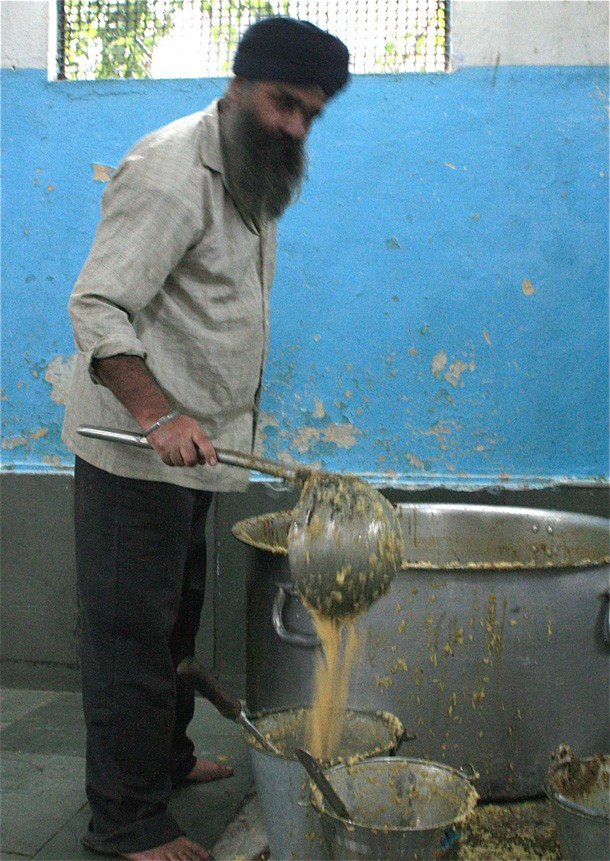 Cleanliness is an important part of the Sikh religion; here, volunteers wash dishes. 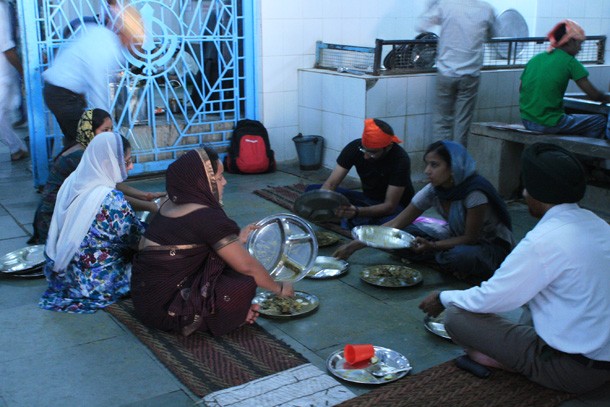 Each time we walked into a new area, we asked for and were granted permission to photograph. It was no different when we walked into the dining hall. Hundreds of people sat cross-legged on long mats while volunteers walked up and down the rows distributing lentils and chapatti and rice. My father and I clicked away, spellbound by the magnitude and calm of these hundreds of volunteers and diners. 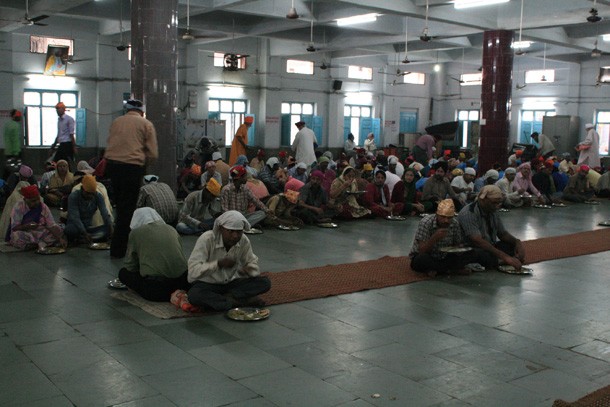 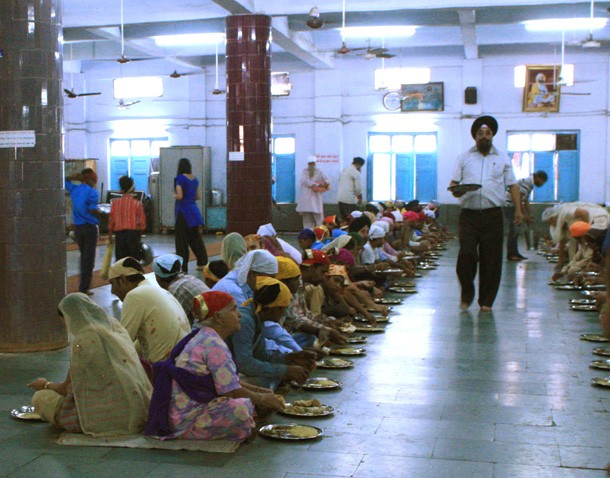 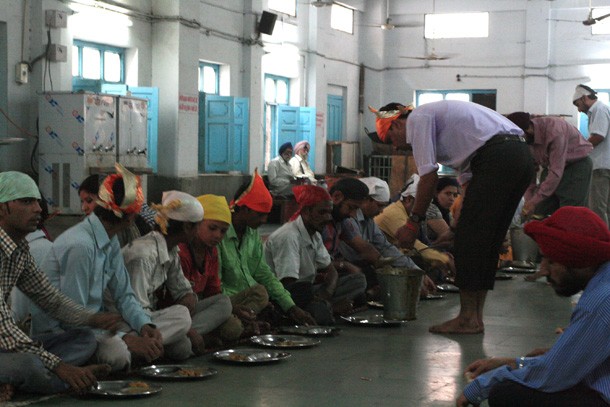 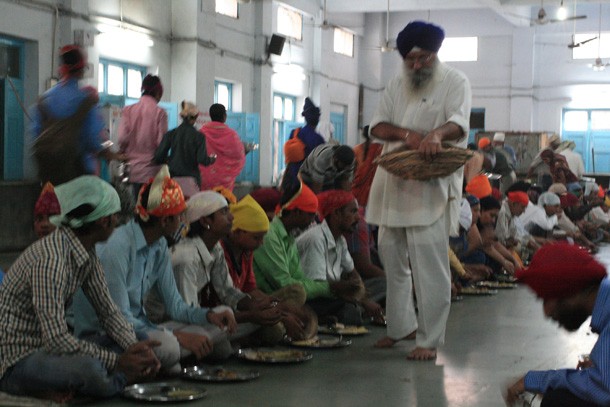 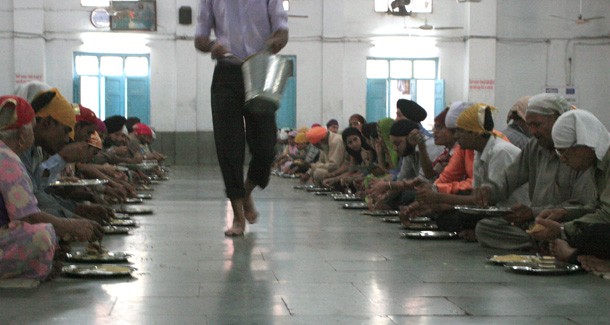 After we’d photographed in the dining hall for a while, one of the volunteers began talking with our guide and gesturing toward us. I was afraid we had done something to offend them, but our guide told us we’d been asked to sit and eat.

“Please tell him it would be our great honor,” I said to the guide.

The man led us to a spot on the mat, handed us each a metal plate onto which he ladled lentils and rice and smiled, pausing long enough to look into our eyes before he moved on.

Sitting cross-legged on the floor along the row, we were an equal part of the community. A sense of wonder washed over at me: we were not better, richer, poorer, smarter, slower or less or more good looking. We were thinking, feeling human beings just like all the others in these rows. We were receiving nourishment that was handed to us with no judgment or obligation, but out of the most sincere sense of sharing and giving. This was not the “have’s” giving to “have-nots”. It was egalitarian: some people ate and others cooked. All of us who ate did so seated on the same level, facing out and tasting the same food. It wasn’t dull; it was a beautiful expression of wiping away comparison and competition, of giving and receiving with respect and humility.

I looked over at my father, whose face bore a nearly childlike expression of tenderness and marvel, and I knew he felt it too.  We held each other’s gaze for a moment: one of us said, “This is incredible” and the other nodded in agreement. We stayed there a while, until we felt ready to leave. We slowly, silently walked out, handing our dirty plates to the waiting volunteers.

If I am ever again asked to describe the best meal I have ever eaten, this is the answer. The lentils and rice served to me with the purest spirit of giving and fellowship; lentils and rice that brought equality and humility to the hundreds of us who ate knee-to-knee at the Sikh temple that day.

* Despite my interest in learning more Sikh religion, I was unable to do so when I returned home, thanks to Hurricane Sandy and my resulting lack of internet/library access. If you can correct or provide better explanations than mine, please feel free to comment below.