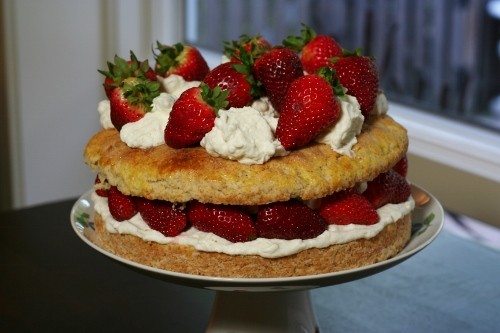 It’s not easy being me. How would you like it if your spouse whipped up a little number that looks like this…late on a Friday afternoon, when you’ve had one of those weeks, and you’ve been cooking all day and dead on your feet and you can’t stop yet because there are still deadlines to meet…and then you look over from your side of the counter, where you’ve been hunched over tuna and fish sauce and scallions for the third time today…and there on your right is the man you love putting the final touches on a project he is doing for Driscoll berries…and you wonder, if you eat half but skip dinner…

And then you think about the ten pounds the camera puts on most people, but generously gives you 15, and how you’ll be looking that camera right in the eye next week while it widens the world’s view of you. You ask the man you love ever so sweetly if he would kindly put that thang away, and he looks puzzled and asks, so quietly you can barely hear, if you would mind taking a photo.

And your mouth is flooded by those damn salivary glands, so you nod and look outside at the waning light and wonder if you accidently knock one of those berries off and just happen to catch it—that berry over there with all the whipped cream attached to it—would it really matter in the photo? You could just turn the cake around and shoot it from the other side, and neither he nor Driscoll would know.

And then he says he has to run an errand, which means he is leaving you home alone with that luscious pile of fruit sexiness. Those jacked berries — so full of themselves and their berriness they swagger and you almost want to tell them to be a little more discreet (maybe throw on a bathrobe or something). And you know the whipped cream is just asking them for it, all sweet fluttery lashes and brushing up against their juicy sides and acting so pure and innocent and angelic. You know about that whipped cream. You’ve had your dalliances.

But that biscuit cake is new, and you know it’s trouble. Golden and crisp outside, but with a soft, flaky soul you can truly lose yourself to. You’re a goner. You know you are. And you just hope that when you stand in front of that camera next week it has pity and narrows its view of you, but either way— this is just so worth it. 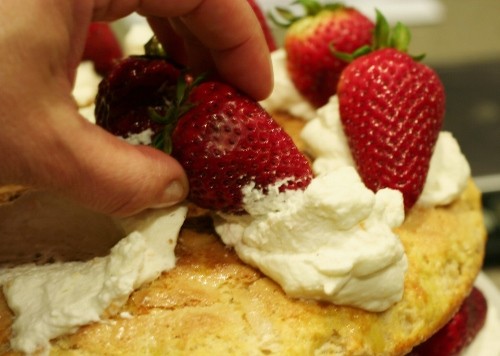 A real strawberry shortcake is made with a buttery, slightly sweet biscuit, like this one. Those  impostors made with yellow or sponge cake can be tasty, but they ought to find an appropriate name for themselves, like Strawberry Whipped-Cream Layer Cake.

For the biscuit (cake):

2. Combine the flour, 1/2 cup of the sugar, baking powder, baking soda, cinnamon, and salt in a medium bowl. Cut in the butter with a pastry blender or 2 knives until the mixture resembles coarse crumbs. In a separate bowl combine the buttermilk and vanilla extract; stir the wet ingredients into the dry until just moistened. Turn the dough out onto a lightly floured surface and gently knead 4-5 times with floured hands. Pat the dough into an 8-inch disc and transfer to the prepared cake pan. Gently press down on the dough until it fills the bottom of the pan and the center has a slight depression. Brush the top with the yolk and sprinkle with the remaining 1 1/2 tablespoons sugar.

3. Bake the biscuit until golden and a toothpick inserted into the center comes out clean, 21-23 minutes. Cool in the pan on a wire rack 10 minutes. Remove t from the pan and cool completely on wire rack, about 30 minutes. Using a serrated knife, carefully split the biscuit in half horizontally.

5. Combine the heavy cream, confectioners’ sugar, and orange zest in a bowl and beat with an electric hand mixer on high to stiff peaks.