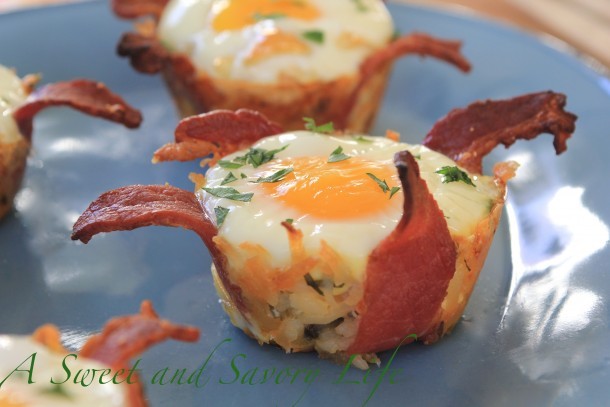 I love waking up to the sound of birds chirping and the smell and feel of a breeze coming in through the window. (We can finally sleep with the window open again!) It makes me feel all charged up and renewed. In fact, this weekend I’ll clean out the closets, straighten up the garage, plant the flower pots, bleach the patio…STOP!

I will not do any of those things. I will celebrate spring with brunch. Brunch served atop a lovely flowered tablecloth with a bunch of fresh tulips* (see below for a really cool tulip trick)  on the counter. Ah, that seems so much more calm and pleasant and spring-like, doesn’t it?

These pretty little individual egg cups are just the thing for brunch, and you can make the nests a day ahead. Because we often have many non-meat eaters around our table, I like to make half the cups with bacon and half without– they work equally well both ways.

When making the (unfilled) nests ahead, allow them to cool completely before wrapping them– still in the muffin pan– in plastic wrap. Refrigerate, but allow them to come to room temperature before adding the egg and baking again.

* Cool Tulip Trick Alert: This really works. To keep your tulips upright, rather than bending all the way over the side of the vase after just a few hours, place a penny in the vase with the water. Your tulips will stay upright and last longer. But do remember you’ve put it there when you change the water– you don’t want it going down the kitchen drain.

Are you looking for more brunch dishes? How about these:

Baked Eggs with Spinach and Potatoes