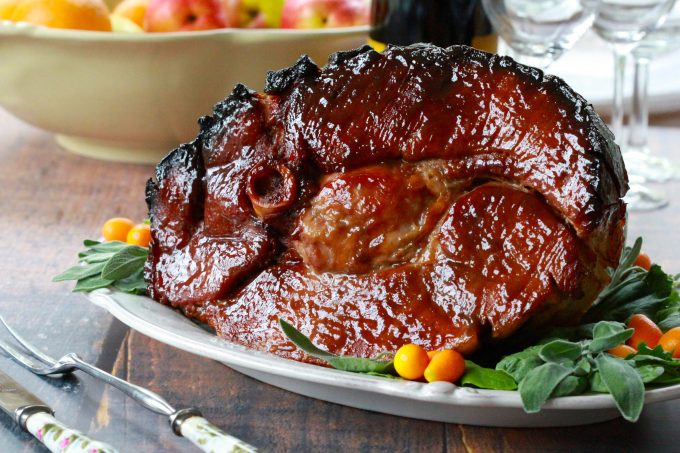 This is a Tale of Two Hams. Both are crazy-delicious and outrageously simple to make– and both use the same simple trick to bring them to glory.

We created the Brown Sugar and Cola Glazed Ham pictured above for Anolon, and they in turn made this great video which shows just how easy it is to prepare. (The video has something like 200,000 views!) Go here for the recipe.

Days later, we made this Ginger Ale and Rum Glazed Ham. It has equally robust, great flavor– and a hit of piquant heat from the ginger. 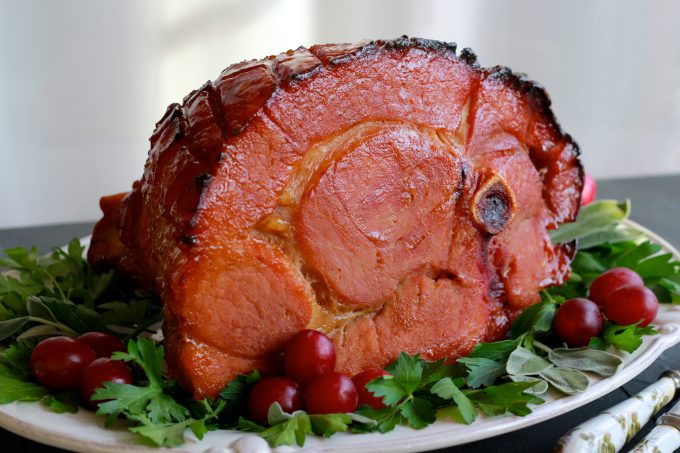 Have you figured out the “secret” to great ham? It’s soda.  It might sound crazy at first*,  but Southerners have been baking ham with cola for generations, because they know that caramelized sugary liquid does wonders to the salty, savory meat. All you need to do is pour a little soda– cola or ginger ale, depending on your preference– and another liquid (we used orange juice with the cola and rum with the ginger ale) over the ham at the start. You take more of those same liquids and boil them madly in a saucepan along with two or three other ingredients (mustard, brown sugar, jelly, etc) until they become a thick syrupy glaze, then brush the ham with the glaze as it cooks. It’s really that simple and mistake-proof.

Your dinner is taken care of. Now let’s go rejoice. We all deserve it.

*I don’t even drink the stuff, but I appreciate what a great ingredient it can be.