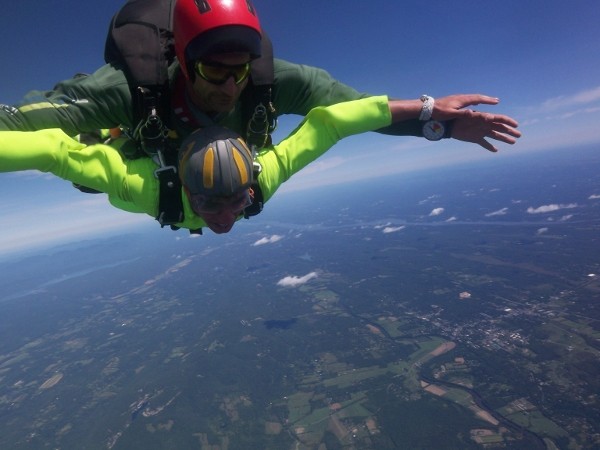 I can’t write about food today. For one thing, I am too busy having a pity party. For another, for one of the very, very few times in my life, I can’t really think about food. Well, Jell-O and clear liquids are okay, but I can’t write about them with any great passion.

I’ll start my sad, sad story with the picture above. That’s my son Zak, three years ago when we went skydiving together as a surprise for his 18th birthday. On another birthday, his surprise was a helicopter ride around Manhattan. You get the idea: he is my adventurer-in-arms. So for this, his 21st, I felt it was time to put him in the control seat of his adventure: I got him a helicopter flying lesson. Followed by dinner at one of my favorite chef’s restaurants, Peter Kelly’s X2O.  And while I have never been one to spoil my children (just ask them), there’s more. That was for tonight, Friday. The plan was to wake him up Saturday morning and head to Atlantic City—after all, he is now old enough to gamble. Pretty good stuff, right?

Things started going amuck when Irene strutted into the picture, billowing her skirts around in big swirls of feminine swagger, as if to prove Mother Nature was ever so much more powerful than Mother Marge. Okay, Irene, I get it. You are big and strong. (Wench). Atlantic City started looking iffy at best.

At least we would still be able to have the helicopter lesson and the great dinner. He’d love the surprise, he loves Peter Kelly’s restaurants and had not yet been to this newest one; I’d make a toast, he’d have a glass of champagne (or two) and we would re-schedule the Atlantic City part.

But on Thursday morning when I woke up, I knew the stomach ache I’d been having for a week had turned into something. A couple of hours of being pretty darn sick later, Ebo started making noise about going to the emergency room. I, of course, disagreed. But a couple of house after that, I was malleable (is that what they call it when a person has turned into a wet rag?), and we headed over. We were in the ER until 3am, when I proved I could keep the antibiotics and water in my system.  (I am very, very happy I did not see anyone I know while there. If  you saw me and I didn’t see you, for the record: my husband chose the brightly colored striped socks. I would have gone with simple white to better blend with the hospital robe).

Anyway, back to my pity party. The hospital really isn’t part of it, it’s what came after that. I was just sure that I would be able to rally and go to the helicopter lesson and dinner at X2O. I stayed in bed all day (except for a short trip downstairs to the kitchen for Jell-O). As the time drew near, I went to my closet to pick out what I’d wear. Standing in front of the rack of clothes was exhausting and overwhelming (and not because there was just so much to choose from—no Kardashian am I). I knew I couldn’t sit in a chair in a restaurant for two hours.

They kissed me goodbye and left for the Great Surprise. And as I sat propped up in my bed thinking about how all the plans for Zak’s weekend were falling apart, it occurred to me for the second time how gracious and sweet and very un-child like he was being about these many disappointments on his big birthday. In my weakened state, I texted the gang to see if they’d arrived at the airport.

Yes indeed, and Zak was thrilled. Wish I’d been there to see it. A little while later I texted to check on their progress, and there were some unexpected delays with the helicopter. A while later, more of the same. You just know where this is going, right? The helicopter had mechanical issues and the flight lesson was cancelled.

Zak said he is happy the helicopter lesson didn’t happen, because now we can start over and do the weekend the way I planned, start to finish–no hurricanes, hospitals or broken helicopters. I think saying that was his birthday present right back to me. God, I love that kid.

Post Script: If you want a recipe with this week’s blog post, I suggest you look on the Jell-O box.