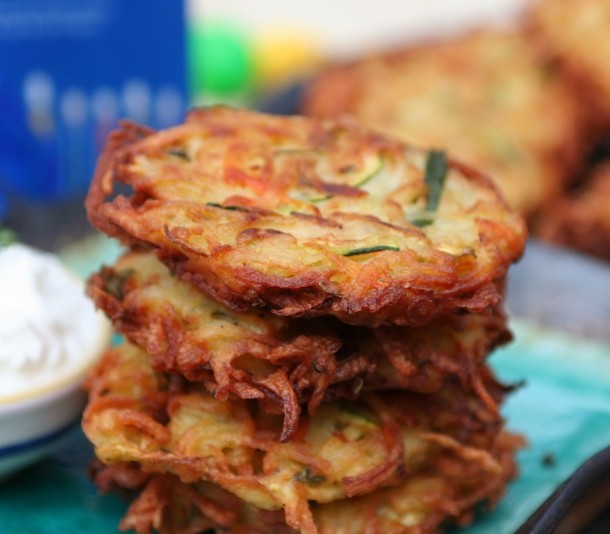 I have developed recipes for and cooked a gazillion latkes over the years. I have written about latke making,  talked friends off latke ledges, photographed latkes (I prefer eating them), and even sustained mild injuries making latkes. Because I refuse to wear an apron while entertaining, making latkes has ruined several favorite tops: tiny drops of oil jump to my chest like a hungry baby to its mother.

But it’s been years since I’ve had to toss a silk blouse after a Hanukkah party, because I found a solution. Actually, I married one. The oil seems to hold no fondness for his chest (perhaps because it is farther away from the pan) and he is happy to stand over the stove for hours while I work hard at being a good hostess. (And by that I mean have fun mingling with our friends and family).

If we were willing to make the latkes ahead and keep them warm in the oven, no one would have to stand at the stove– but we’re not. It can be done, certainly– and here’s how; the result is quite good. But nothing beats a latke straight out of the frying pan. Nothing.

about 3/4 cup of canola or olive oil

1. Place the egg in a large bowl and beat lightly with a fork. Stir in the salt and pepper.

2. Using the grater attachment of the food processor (or a box grater), shred the potato and onion together. Add to the bowl with the egg and toss; stir in the flour and toss until thoroughly combined.

3. Heat approximately1/4 cup of oil the oil in a large skillet over medium high. Use a 1/4-cup dry measuring cup to scoop the potato mixture into the pan and pat the top lightly to form 3-inch diameter latkes. Cook until golden on the undersides; about 4-5  minutes. Turn and cook until golden and cooked through, another 4 to 5 minutes. Repeat using the remaining batter.

4. Serve immediately or keep warm briefly in a 250-degree oven.