Yesterday I found out I won an award and I burst into tears. They weren’t those Miss America tears of over-the-top excitement, where the beautiful girl fans her eyes filled with glimmering crystal droplets while smiling broadly and blowing kisses at the audience.

No, my tears were the ugly kind, where the corners of my mouth head south and eyeliner streaks down my cheeks. I was thrilled — in more than one way– to win the Association of Food Journalist’s award for Best Food Essay of the year. I was honored that newspaper and magazine editors and writers who are members of this prestigious organization chose my essay. It meant the world to me that it was for this piece (reprinted from Newsday below), written in honor of my mother shortly after her shocking death.

My tears were tears of sorrow. I wanted to pick up the phone and tell my mother about the award– that this piece I had written about her had been chosen. My friend Ann B. told me that the feeling of wanting to pick up the phone and speak to my mom may never go away.  “And  I don’t think that’s a bad thing,” she wrote. I look forward to the time when those urges to speak to her bring cherished memories of our closeness rather the stabbing pain of missing her. I know it will come…

About a year after her father died, my friend Laurie remarked after the unveiling (a Jewish ceremony at the cemetery that usually takes place 11-12 months after the funeral) that she saw great wisdom in the tradition because it allows a mourner to see and feel how much their grief has evolved over the course of the past year. It has been longer than that for us now, and the four of us– my sisters, father and I– continue to find our way.

A few weeks ago, a friend asked me if my grief was any less gripping. Reflexively I answered, “I miss her every day, all the time– and the holidays are the worst.” But I thought about it later, and realized I did not answer her (insightful) question. Did I skirt it because I am afraid that to no longer feel that wrenching loss is somehow disloyal? My brain scolds my soul at the silliness of that, yet the feeling lingers.

I wrote the piece as a tribute to my mother; because I wanted and needed to put words to what my sisters and I had lost.  I wrote it as a remembrance; a love story. And I wrote it because I didn’t have that last opportunity to tell her. I cried yesterday because my mother, who loved attention, would have quietly relished that hundreds of thousands of people had read what a wonderful mother she was.

Today, as I stood in my kitchen munching on a Macoun apple (her favorite) it hit me. I nodded, smiled, and then just laughed aloud. One year and eight months after she died, my mother gave me another gift: the honor and pleasure of winning this award. Thanks, Mom. 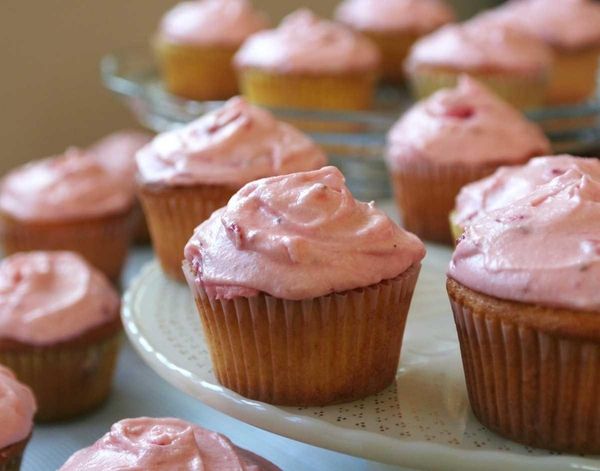 This remembrance is a valentine to my mother. To all mothers, really. Because it is about the many gifts they give, and those that I was fortunate enough to receive.

When my two sisters and I were little, my mother told us she loved us with words, hugs and strawberry frosted cupcakes. They weren’t the only food that said I love you, but they were the first I remember, and the prettiest.

The cupcakes looked like ballerinas twirling around in frothy pink tutus. The frosting wasn’t like the icky thick stuff that comes on bakery cupcakes: it was light and fluffy, with little bits of fresh berries that gave it that beautiful fairy princess pink color.

As soon as I was old enough to drag the stool over to the counter, I started helping mom in the kitchen. When other little girls wanted to play with their friends, I would hurry home after school to bake with her.

In cooking, as with everything she did, my mother was exacting and mindful: She showed me how chopping nuts to the perfect size makes the cookies much better. Take the time to bring the butter to room temperature and cream it long enough or, she warned, using one of her favorite expressions: “Haste makes waste.” In baking, as in life, she said, do something right — or don’t do it at all. What good is a thumbprint cookie if the cherry is burned?

Over the whirring of the electric mixer, my mother gave me a safe haven to talk, and even through my teens, made me feel that everything I said was valid and everything I felt was important.

It is a gift to grow up knowing that you are loved completely and unconditionally, and that what you say and do is truly interesting. But Mom did not allow that to spoil us. In fact, we had more chores than any of our friends — and we had to live up to her extremely high standards when we did them. If I slacked just a little — if she found even one teeny tiny spot I missed when washing a skillet — I had to rewash all the pots and pans from dinner that night until they were perfect — even if my friends were sitting in the den, waiting for me to go out. I resented her for that when I was a teenager, but now I can’t thank her enough for being such a taskmaster.

This past Thanksgiving, Mom was on overdrive. She and my Dad were going on a 3 1/2-month cruise around the world, and they had much shopping and packing to do. But every year onThanksgiving, my Mom made her gravèd salmon, a dish my sisters and I just love. The salmon takes at least three days to cure, and each day the heavy piece of slate that weighs it down must be lifted and the juices poured off. When I suggested that, given all her preparation for the trip, we could forgo the gravèd salmon this year, she ignored me. She wanted to make it for her girls.

The salmon was especially good this year, and our Thanksgiving was filled with love, abundant laughter and great food. On Jan. 9, my parents left on their trip of a lifetime. Three days later, while in their first port of call, a tour bus hit my mother. She was taken by medevac jet back to the United States and, 12 days later, the indomitable Jane N. Perry died at age 80.

I hope by next Thanksgiving I will able to make her gravèd salmon. Right now, in all my grief, all I can do is bake strawberry frosted cupcakes. The hum of the mixer is the only music I can bear, and every cupcake I frost is my way of telling her how much I love her.

3. Fill paper liners about halfway with batter; bake 20 to 25 minutes, or until a toothpick stuck in center of cupcake comes out clean. Cool before icing. Makes 18 cupcakes.

1. Cream the butter and cream cheese until light and fluffy; add sugar and cream again. Add the lemon juice and vanilla; cream until thoroughly combined.

This dish can be made with a smaller piece of fish. When you buy the fish, be sure the pin bones are removed and the skin is on.

For each pound of fish:

2. Place about half the dill on the bottom of a platter large enough to hold the salmon in a single layer. Place the fish, skin side down, on top of the dill. Pat the rest of the dill onto the top of the salmon and top with an even layer of the sugar-salt mixture.

3. Cover loosely with plastic wrap and top with a heavy, flat weight, such as a piece of slate.

4. Refrigerate 3 to 7 days, draining off liquid daily. To serve, cut fish across into very thin slices and fan on plate.

Combine all ingredients and refrigerate, covered, until serving.