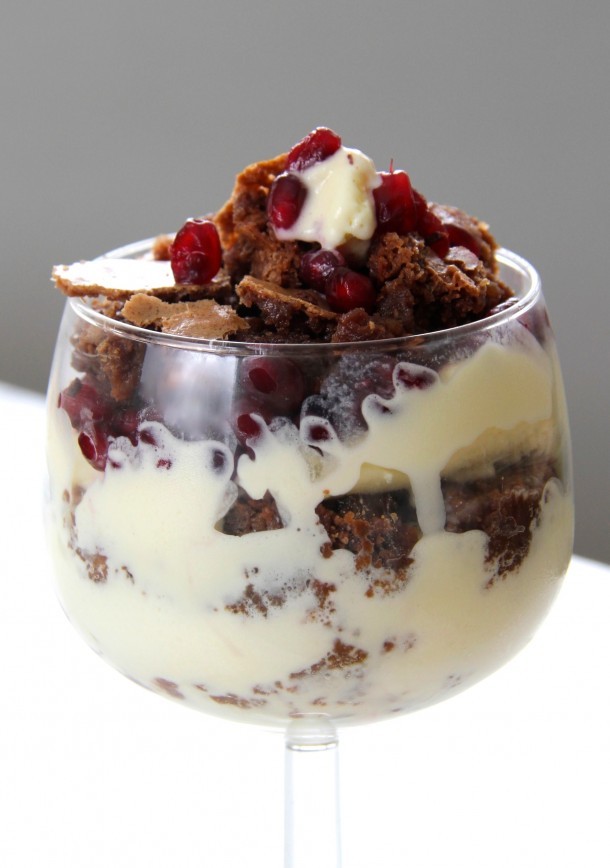 There are people who crumble into adversity and others who stride through it. The Crumblers are not necessarily weaker people; they can be soulful and sensitive and their lives deeply informed by the adversity.

The Striders, though—they take my breath away with their courage and strength. They take punches that should knock them right out, but instead they recoil and slowly unfurl, straightening their bruised backs and brushing off their pant legs. When they take that first step, I am awed, and ask myself what I would do. Who would I be in that situation? And then, before I have time for any more navel-gazing, they don’t just walk– they stride onward with purpose and intent.

I wasn’t thinking about my extraordinary Strider friend the other day when I was photographing my column, but she was on my mind because I had just watched her leap, gazelle-like, over a thorn-covered, ten-foot high wall.

I had made brownie pie and was photographing it topped with ice cream. Whenever I try to photograph ice cream, I go into anxiety-induced over-drive. Will I get my shot before it melts? Or will I have to start all over, re-setting the shot with clean plates, positioning the shot for the now-changed light… wasting hours because I can’t get it quickly enough? Let me be clear: this is anxiety of a certain level– a level that never touches my soul, doesn’t get a glimpse of my heart, and that certainly will not interfere with my sleep. It is baby anxiety that lasts only as long as the photo shoot.

I got my brownie pie shot in time, but barely. It’s a whole thing: I want the ice cream to be just melted enough that you can actually see the drippy creaminess on top of the pie, but not so much that it makes the plate a soggy mess. That sweet spot often speeds by faster than I can figure out how to shoot it. But this time I was fairly certain I had it, so I dropped everything to download my photos and see. While I did that, the ice cream continued to drip and melt in my studio upstairs– making a big, white, sticky mess all over the plates, my table and the hand-wash-only linens. Damn.

Oh, and I’d forgotten to put the container of Ebo’s homemade buttermilk ice cream back in the fridge, and it was all melty. What a waste! And my lovely brownie pie was not much more than big chunks of semi-soggy brownie—more waste. And the gems—shimmering ruby pomegranate seeds the Pom people had sent me to show off their nifty new product (pomegranate seeds that come in ready-to-eat cups) –the very same seeds I’d snatched out of Ebo’s hand when I discovered him munching on them—now they were sort of floating down the babbling brook of ice cream flowing over the edge of my table. My ever-helpful dog Jake stood just below the table, lapping up the little puddle to prevent tributaries from forming. Such a good dog.

Okay, yes it was a learning experience. I should have taken care of all this before I hyper-focused on the photos. But then, as I stood looking at my sticky, creamy, messy-mess, I thought of my Strider friend. I thought of her obstacles– and the grace, courage and matter-of-fact way in which she deals with them. Cancer, surgery… yup. She’ll figure out what needs to be done and just do it. And when it gets hard, she gets stronger. I know, because I have seen her leap tall buildings in a single bound.

I scooped up a little of this and a little of that from the plates and created a dish that spun my husband’s wheels. I hadn’t just made the best of a mess, I’d made something better of it. Because that’s what my Strider friend does, but in a much bigger way.

It doesn’t get much easier than this: you melt the chocolate and butter, stir in the other ingredients and transfer it to a pie plate to bake. Serve it topped with whipped cream, ice cream, and berries or pomegranate seeds or anything else your heart desires. (Caramel sauce, shaved chocolate, sautéed bananas…). Or, crumble it up into wine glasses and layer it with, say, ice cream and fruit. On purpose.

This is a mildly chocolate brownie. If you want more intense chocolate flavor, use dark chocolate.

2 ounces semi-sweet or dark chocolate (to taste), cut in bits 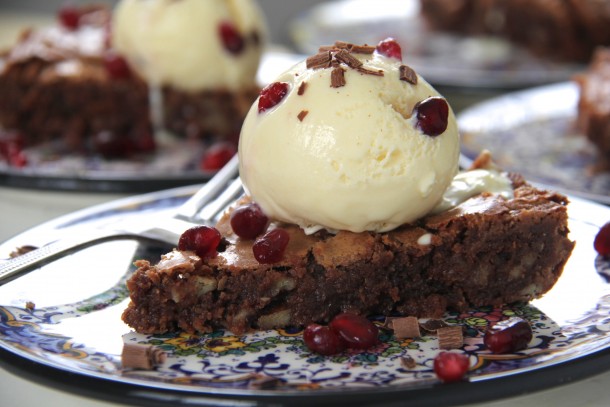