This is how much a mother loves her young.

A bird built her nest just a foot beyond the wooden fence in my yard and about five feet off the ground. It was not a wise place to build the nest, but a mother needn’t be smart to love brilliantly. 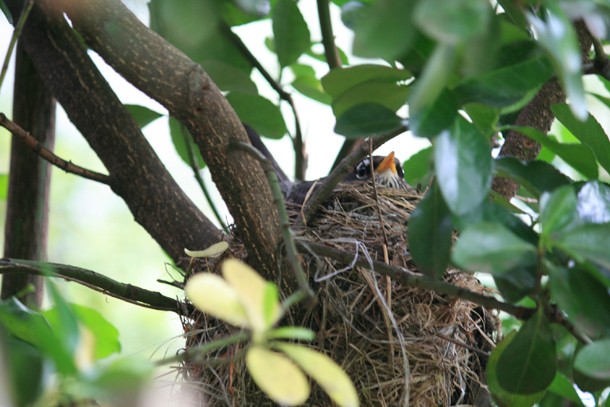 We watched from a distance as she sat on her nest; I waited for her to fly away so I might peek at her eggs. But mother birds can be very patient; she sat unmoving on her nest. (Although I wonder which species is truly more patient: the human, who carries her young for nine months, or the bird, who sits on her eggs for just twelve to fourteen days. Still, humans can read and work and ready the nursery during that time; birds just sit and stare and venture off now and then for worms.)

I had waited as long as I could. Slowly, stealthily (for a human), I made my way closer, hoping to at least get a picture of her on the nest. When I got close enough to stick my camera, like a big mechanical nose, right in her business, she flapped angrily and flew several feet up and away. 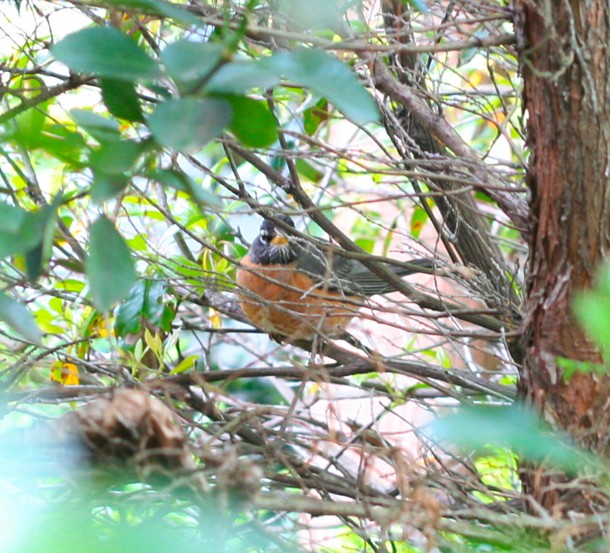 From her perch she watched me hover over her luminescent blue eggs, in fear, no doubt, that I was a vulture or a bluebird, out to steal them away. 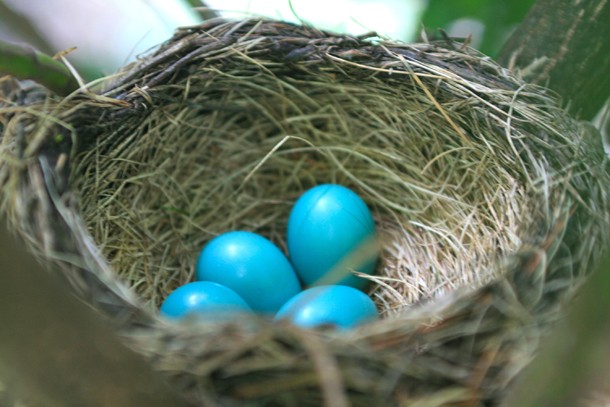 I wanted only to capture their beauty, their jewel-like glow, with my camera. But I am a clumsy human on a wobbly step stool with a feeble understanding of camera mechanics. I snapped away on and off throughout the day, never quite getting the shot I wanted. As the sun lowered in the sky, the mama bird made her way closer to me when I stood near the nest; perhaps she had gotten used to me. Better yet, maybe she realized I was not a threat. 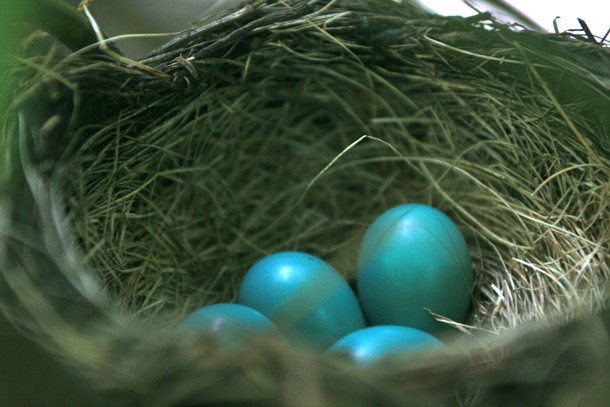 Two days later, three of the eggs had hatched. The fourth egg took still another day. (It happens; my second child chose to extend the gestation period beyond the usual nine months). 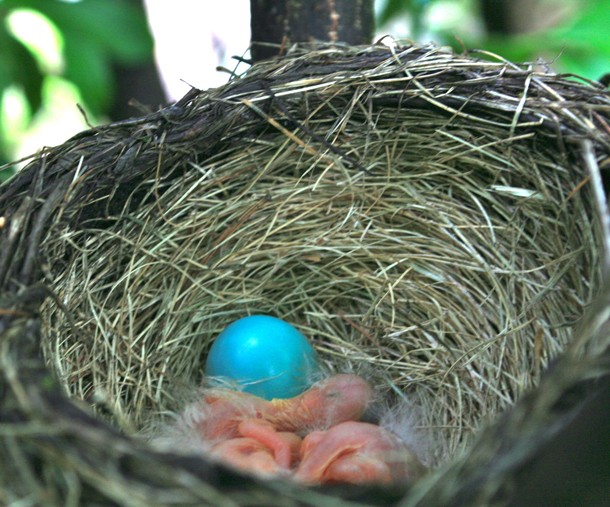 I can’t stay away from the nest. Three more days pass, and those hideous hairless creatures that look like a cross between amoebas, E.T., and miniature dinosaurs are growing tufts of feathers on their rear ends (do birds have tushies?) and crowns. They look like they are playing dress-up in tutus and headdresses. And as though they are sporting great big, bulgy sunglasses: birds are born blind and have enormous, creepy-looking blue-ish black bulges where their eyes will be. 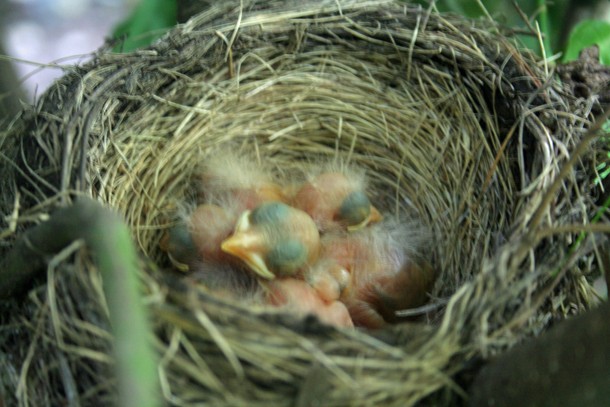 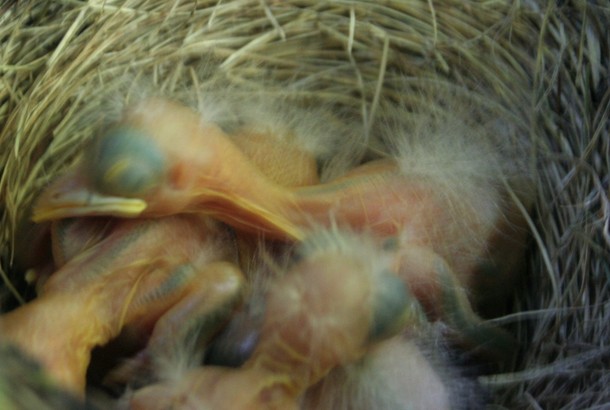 The mother bird hates me and I don’t blame her. 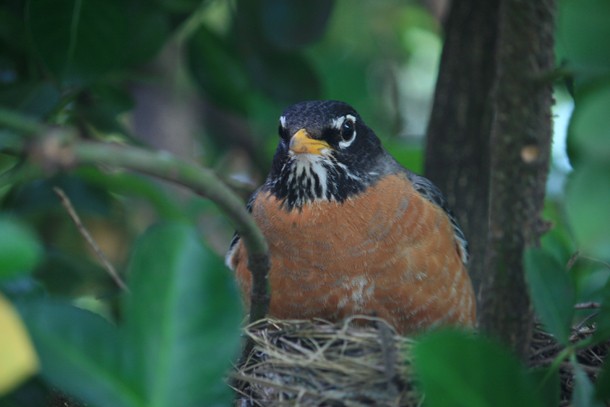 As soon as I come too near, the forces of nature compel her to fly away and watch, yet again, as I stick that big black clicking, beeping tube right close to her hungry babies. She squawks and flaps and jumps from branch to branch to branch before deciding on a nearby tree as I rustle leaves all around her precious babes. I am torturing her.

For two days, I try to capture the moment when the babies lift their heavy heads up on those scrawny necks, opening their enormous mouths in angry hunger. It is the desperate cry that makes mothers everywhere ache to feed the young: I would carry worms to soothe these babies. Instead, I snap away, selfishly hoping to capture those four long necks and gaping beaks sticking up above the nest.

Tonight I just can’t leave. The babies seem to have developed their sense of hearing; they are more reactive to the world around them. My dog barks and they startle and reach up. They snuggle down again, and Mama calls to them. They stretch back up, yearning, shaking in anticipation– and collapse again, as though they’ve just crossed the Serengeti by foot.  I retreat guiltily—they need their mother.

Minutes later I return, like a child who knows better than to sneak into the cookie jar just before dinner. I know the sun will set soon, and then I promise I will leave them alone. But I am so close to getting that perfect shot of all four of them reaching and quaking in anticipation of the food and warmth their mama will bring. Just one last shot… 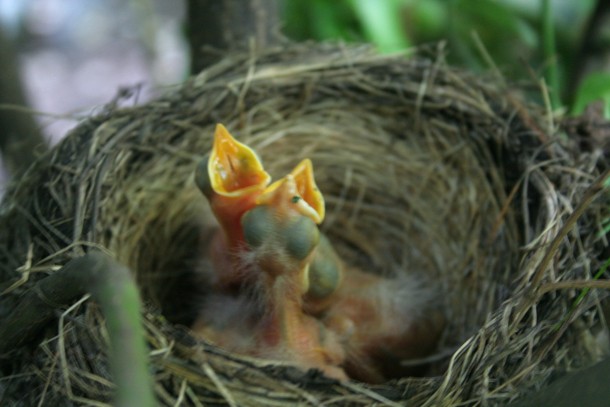 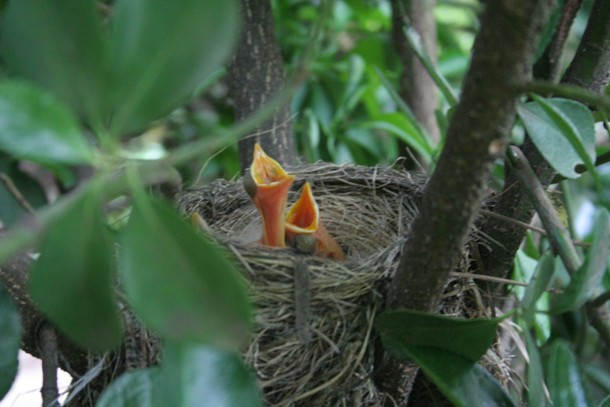 She calls to them, or to her troops in nearby trees. She shrieks, and I think it may be at me. I’ll stop in just a minute—really, I will. I fiddle with the settings on my camera and keep trying. And as I stand on the stool, concentrating with all my might to keep still enough to get a clear, crisp photo, she swoops right by my ear—so close I feel a breeze from her wing and so fast I hear a whoosh.

I am five foot two, and look even taller when standing on a stool. I have arms that are easily four times as long as her wings, and I carry ominous looking equipment that may be capable of doing great harm. And yet this mama bird will attack me to protect her babies.

That’s how much a mother loves her young.