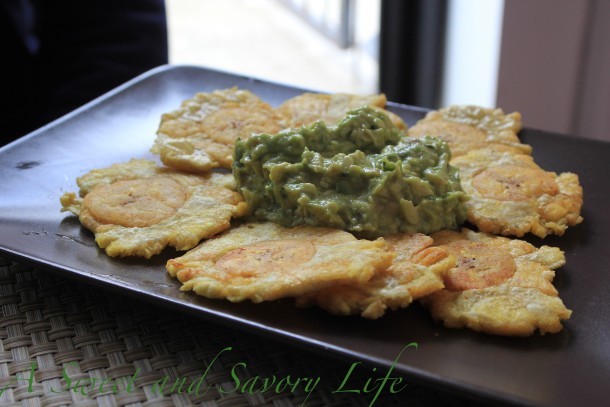 They came just a couple of weeks apart. First it was an old friend who is chef to the Governor General of Canada, Louis Charest, and just after that, renowned cookbook author and Parisian-American, David Lebovitz. Both wanted to explore the incredibly diverse, wildly authentic, hole-in-the-wall restaurants in Queens, New York.

Spend a day eating at our favorite joints in Queens? Yeah, we can do that… all it takes is a little cash (really little– these places are cheap!), stretchy pants, and game companions, and we’re on our way.

We began in Colombia. If I were my daughter, who lives in Jackson Heights right around the corner from The Arepa Lady, I’d probably eat arepas de queso five times a week. (Of course, I’d also be the size of a small nation-state.) How could I resist those sweet, thick grilled corn cakes filled with oozing mozzarella and topped with briny queso blanco– they sing a siren song to my lust for all things rich, sweet and starchy. Plus, The Arepa Lady has a great story. 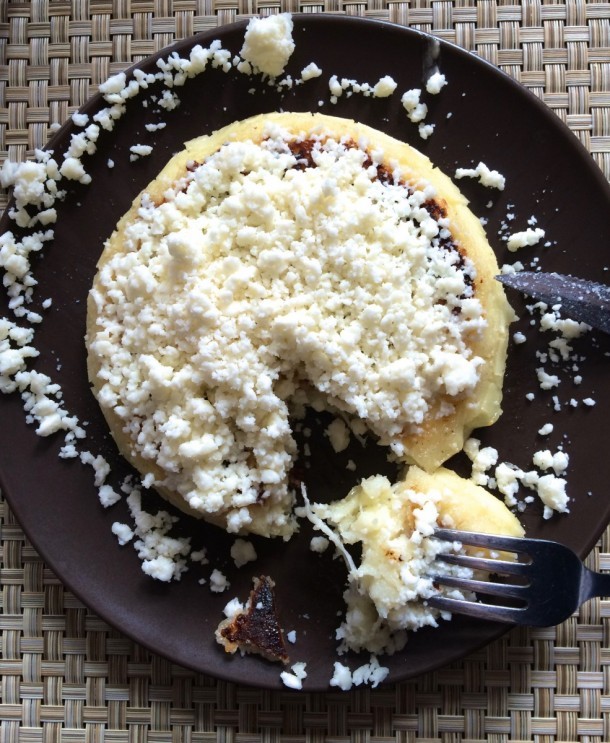 According to my friend Dana Bowen, who wrote a story about her in the New York Times in 2004, Maria Piedad Cano, the Arepa Lady, was a judge in Colombia before the drug wars forced her to flee to the U.S. in 1986. Two years later, she started her now-famous food cart, which can still be found on the corner of 79th Street and Roosevelt Avenue most weekend nights after 10 pm, (when the weather is decent) from April through October. But don’t fret if you’re not a night bird. Ms. Cano’s son just opened a tiny little brick-and-mortar restaurant around the block, and they start serving around 11 am.

Here, as at the cart, you can get an arepa de chocolo: this freshly ground corn cake is much thinner and is served folded over beef, chorizo or chicken topped with queso blanco. 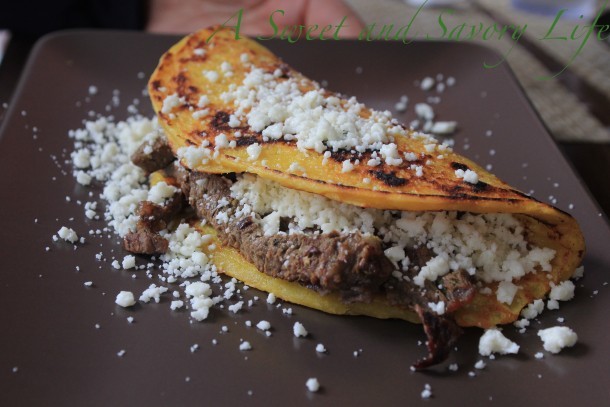 Be sure to experiment with the four squeeze bottles on the table: they contain Cholula hot sauce; “pink” sauce, which is mayo plus ketchup; garlic mayonnaise with cilantro, and sweet pineapple sauce. Here they are on a plate with the remains of fried plantain with mild avocado topping. 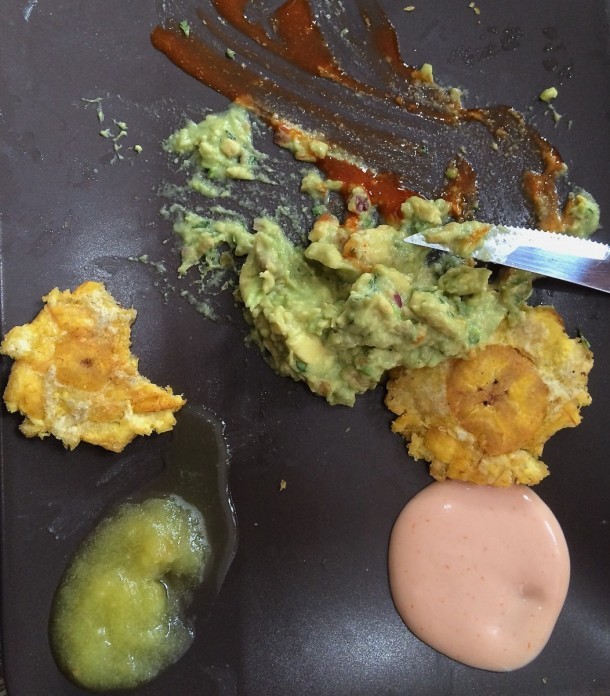 Just a few blocks from The Arepa Lady, you enter into an area sometimes referred to as “Little Tibet” or “Himalayan Heights”,  where you’ll see several street carts selling momo, the thick-doughed, steamed or fried dumplings filled with potato, chicken or beef. Resist the urge (unless your pants are reeeaally stretchy) and head to the somewhat elusive Phayul (which somehow made it on as #27 of Eater’s list of 38 most important restaurants for April, in such esteemed company as Bâtard, Mission Chinese and Contra). When you think you’ve come near the address, look for signs for the locksmith and the eyebrow threading parlor– just above them is the awning for Phayul. Climb the narrow, steep flight of stairs and head through the doorway on the left: your nose will tell you even before your eyes that you have arrived.

Saffron colored walls lend warmth and cheer to this crowded little room. A kitchen along one wall, separated from the room by only a counter, shares the excitement of shooting flames and clattering pots with diners, most of whom seem too focussed on their plates of momo and bowls of steaming stew to notice. 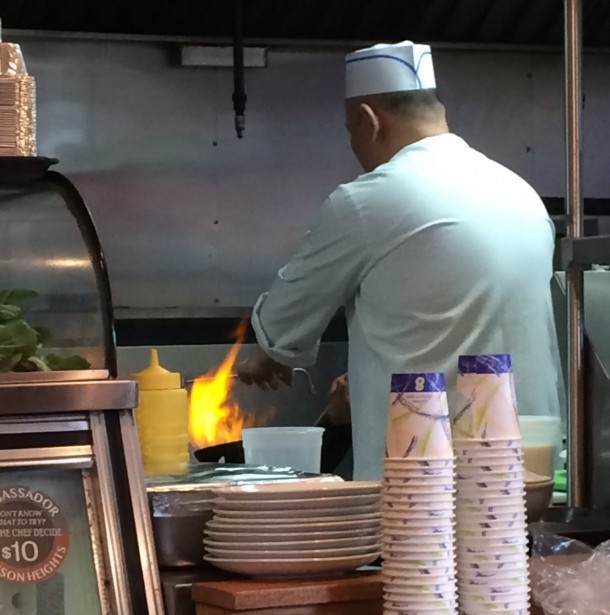 Laphing, or thick mung bean jelly noodles in broth, was beautiful but bland, with a  crunchy-jelly texture you either love or hate. 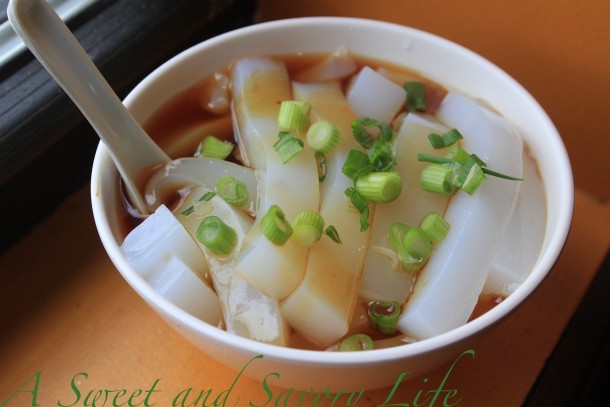 We devoured the chele khatsa, smokey, spicy beef tongue with peppers and onions. 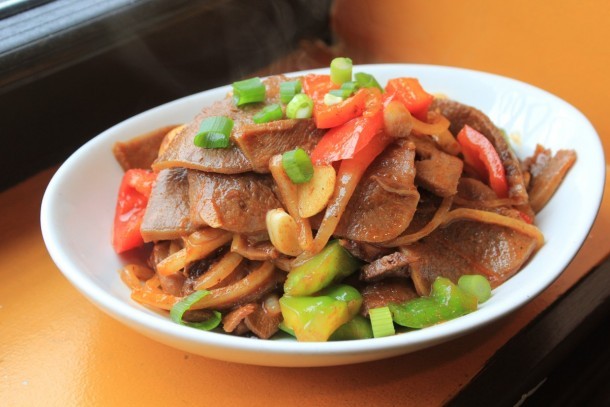 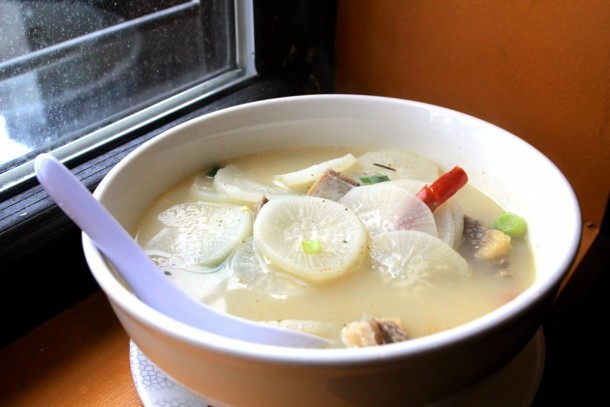 All of the dishes benefitted from the hot pepper condiment that sat on every table. We did a nice job on our jar. 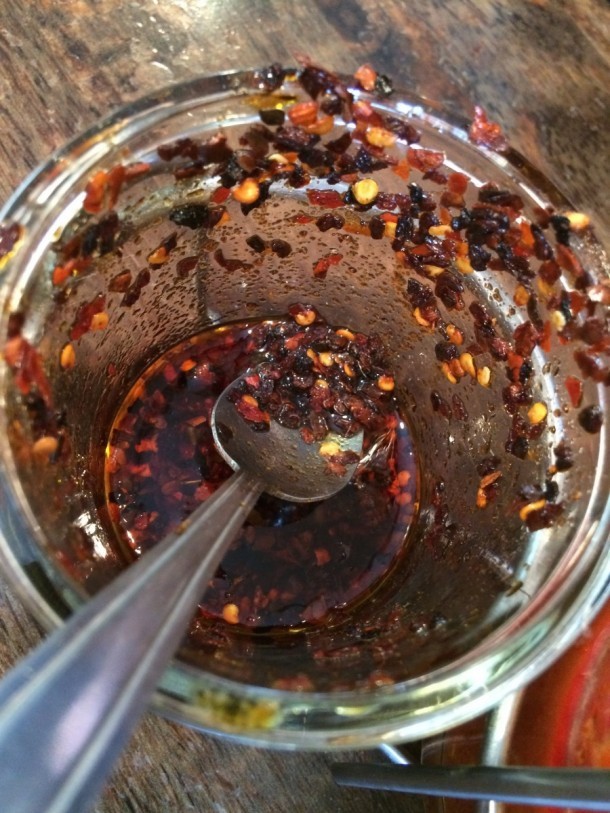 We three– Ebo, David Lebovitz and I –had barely begun our eating adventure at this point. I was trying very hard to pace myself (although I could not resist a few extra bites of the arepa de queso) and was doing that wifey-naggy thing by reminding Ebo every fourth or fifth bite that we had many stops ahead. The reminder was generally followed by a little throat clearing and eyebrow raising, just in case he missed the message.

And then we got to Chao Thai in Elmhurst.

There is a point in every woman’s life when she simply has to surrender to the immediate desires of her body, regardless of what her sensible mind might say. At Choa Thai, often spoken of in the same breath as the other esteemed temple of great Thai food in New York, Sripraphai, I just gave in. The hell with calories and with the awful feeling that comes from overeating– I was here to enjoy the moment, the day and the good company. Consequences be damned!

Their version of the ubiquitous refreshing som tum, or green papaya salad, had that just-right balance of bright lime, crunchy sweet and spicy heat. 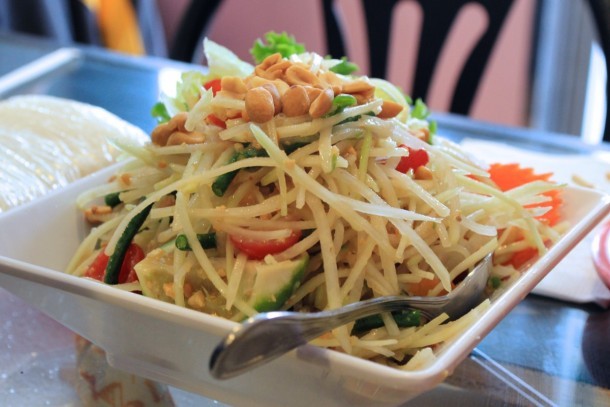 Beneath the classic sweet, sour, salty and spicy flavors that are the hallmark of Thai food, the beef larb had an intriguing nuttiness; bright mint and the gentle bite of scallions gave the dish extra pop. 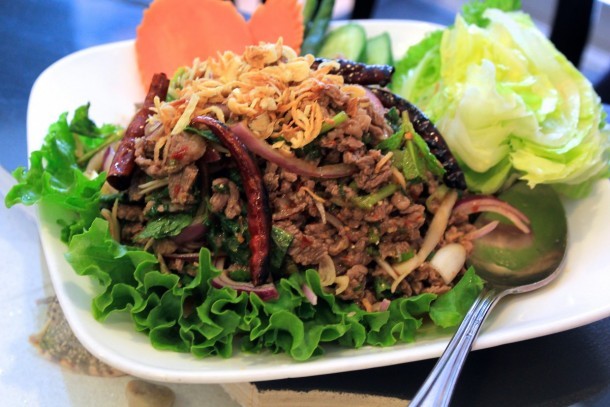 My favorite (although I am guessing the Davids might vote otherwise) was the Green Curry with eggplant. Coconut milk, kafir lime, galangal and chilies made this dish complex, exciting and soothing all at once. 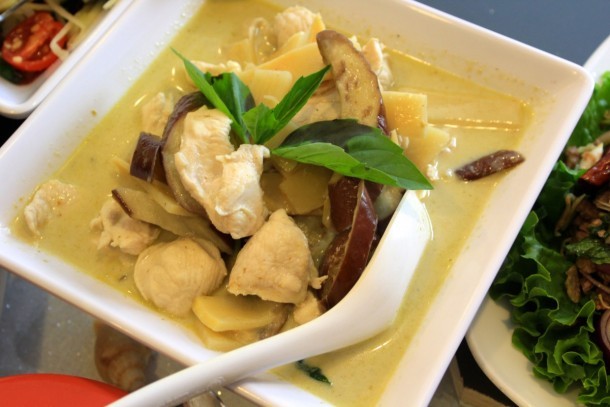 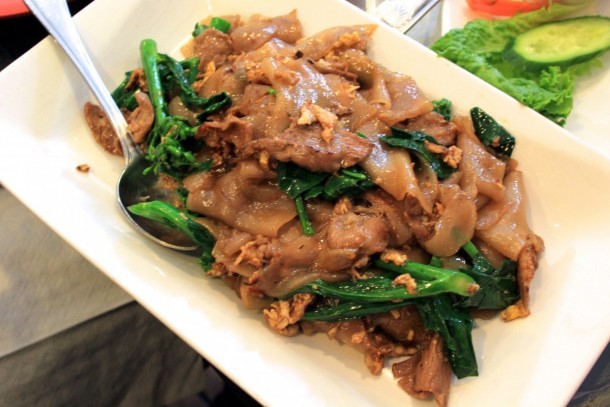 We didn’t do much of a job on the fried tofu, which seemed dull next to all these wonderfully flavorful dishes. Besides, my husband prefers this very different (Korean) version of fried tofu. 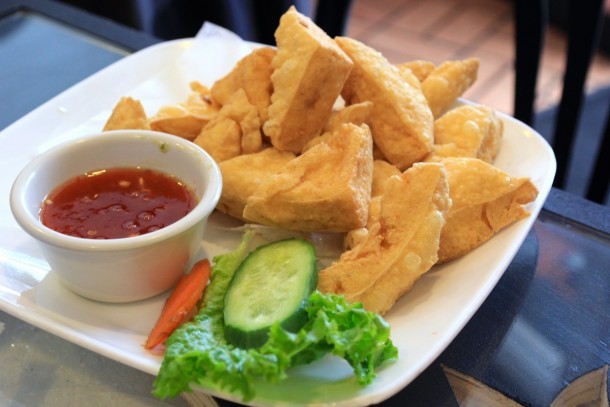 At this point, David (Lebovitz, that is. As Dr. Suess so famously said, There are Too Many Daves!) downed a sweet Thai coffee in order to rev up for our next stops, and we headed to Flushing for Chinese dumplings.

We’d read and heard great things about White Bear‘s wontons with hot sauce, so we overlooked the grubbiness, the tiny crowded room with a mishmash of chairs around three or four tables, and waited our turn like everyone else for a Styrofoam plate of the vaunted #6. 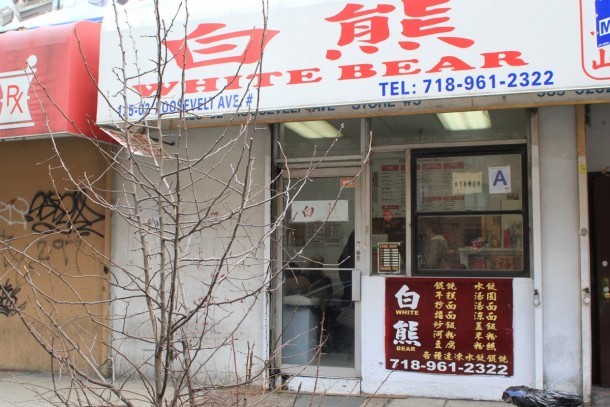 I can’t believe with all the good press (including my daughter’s praises!) the rather bland dumplings we had were typical. I’ll have to visit again and report back… 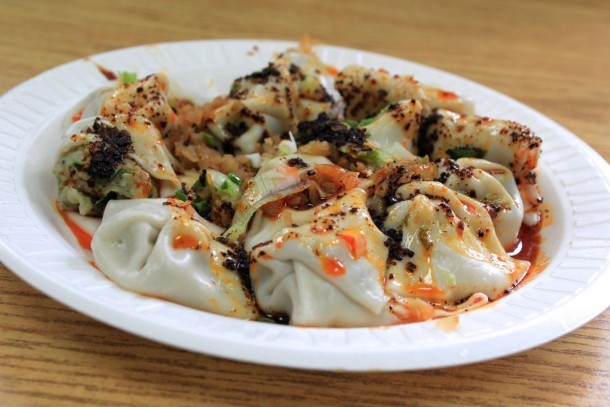 We wondered if our response to the wontons at White Bear was because we’d just come from such great food at Chao Thai, or because we’d been eating all day, but our next stop proved neither was the case, because we loved the food at Taverna Kyclades in Astoria.

Before I begin to sing the praises of this beloved Astoria institution, I have to tell you we have been going to another, Elias Corner , for years: in the summer, we lounge on the back patio under the twinkling lights and eat fresh grilled fish, octopus, salads, potatoes and cooked greens, and in the winter we huddle in the stark dining room to do the same. When it is fish– and only fish– you want, Elias Corner is the place to go. There are no menus: look in the glass case on the way to your table to decide what you want, or ask the waitress to tell you what fish they have that day.

But if not everyone in your party wants to eat fish for dinner, head to Taverna Kyclades, where there is a menu– and, every time we have been, a substantial wait for a table. 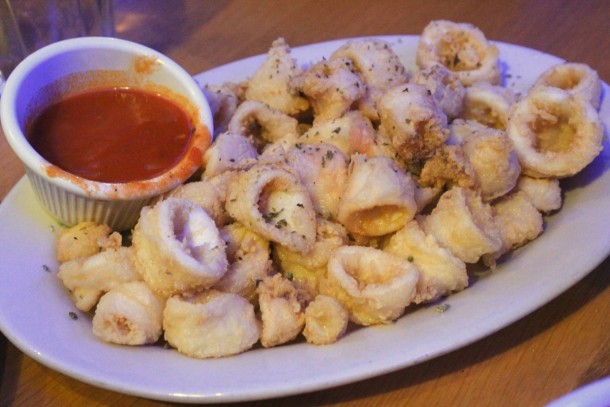 …as is the savory grilled octopus 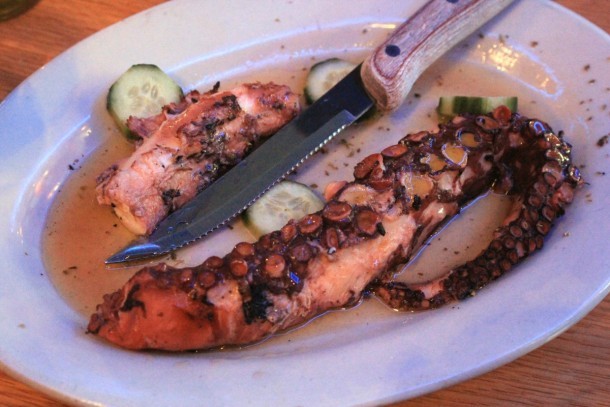 Is there any person in this world who truly doesn’t like fried cheese? When it is done right, as it is here, it is everything we humans are programmed to love: a golden crisp crust over warm, oozing rich cheese. Go on, have a little bite. 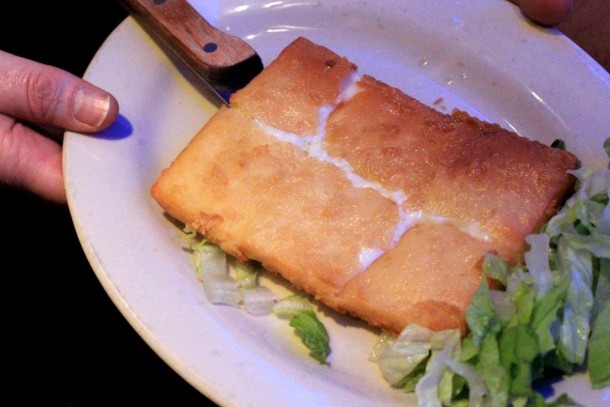 For dinner, you might order lamb chops, the fried seafood platter, grilled chicken or any of the many other classic Greek entrees. As good as this looked… 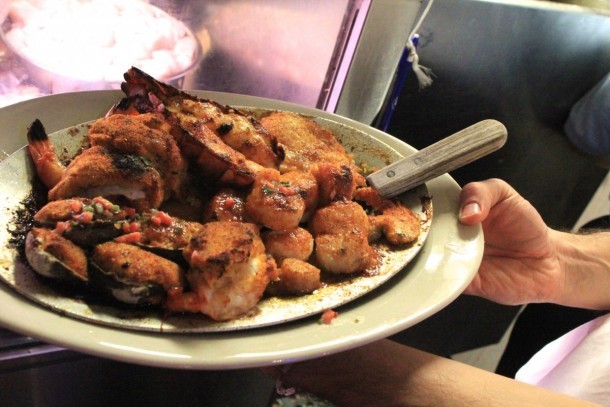 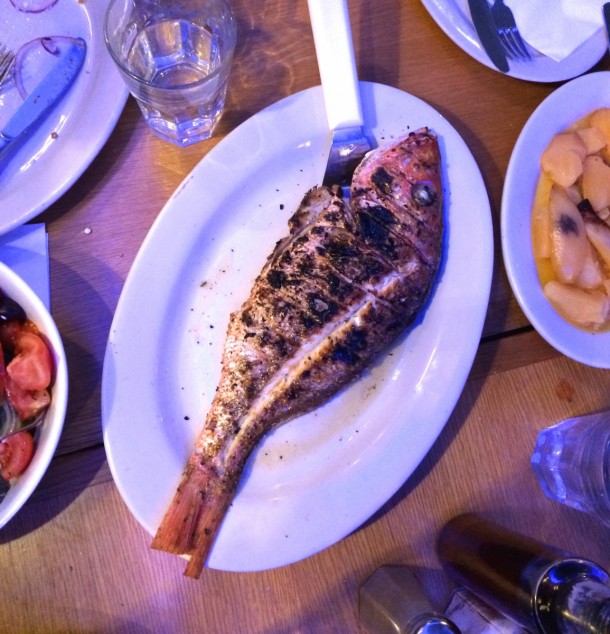 It was all in a day’s work (and pleasure). We went home and slept it off.

Feel like eating at home? Check out this week of 30-Minute weeknight meals I did for The Kitchn.