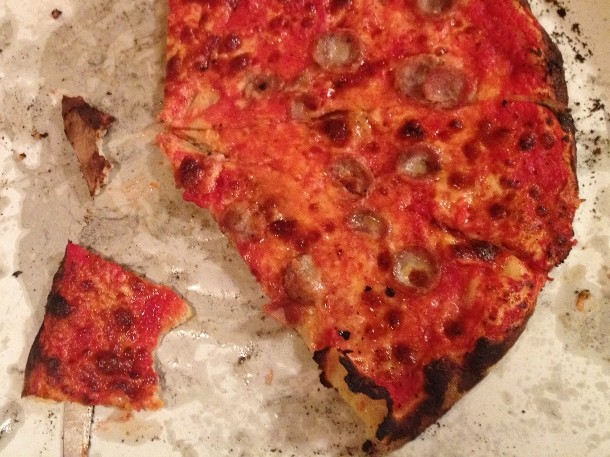 It was late and I was exhausted. We hadn’t slept in 36 hours and we’d been living on peanut M & Ms and Diet Coke. Ebo wanted something decent to eat.

We were in New Haven, so it only made sense we’d head to Sally’s Apizza, stomping ground for food cognoscenti, but a place filled with childhood memories for me.  My mother grew up in New Haven: I remember standing on the vinyl mustard- brown banquette at Sally’s in my new party shoes and Grandma Jennie chastising me, saying that this was a very special place and they don’t let babies in here, so I’d better be on my best behavior and sit down like a lady or I would have to leave. I don’t know why I would have been there alone with my grandmother and mother, or where my sisters were, but I remember the booth and the look on my imperious grandmother’s face as she warned me.

On this night so many decades later, Sally’s was surprisingly quiet. In one corner, a bunch of guys were squeezed around a table filled with Rolling Rock and sheet pans of vaguely oval pies atop grease-stained parchment paper. Behind the men, a group of engineering looking Yalies were commiserating about the surly service with a cartoon-voiced, well-inked short and stocky fellow sporting a 6-inch high jet black Mohawk.

Three guys who looked just as you’d expect men in their successful middle years to look were in the booth behind us. What must they have thought of bedraggled, strung-out looking and possibly ripe-smelling us?

Just yesterday—or was it the day before?—we had been in our Happy Place,  Lake Austin Spa. Once a year, we go there to do cooking demos; we stay a few days and take fitness and mediation classes; get daily massages; and go hiking, running and anything else our little hearts desire. The spa has a soothing laid-back vibe and wonderful, clean food—two of the reasons it is consistently named the number one spa in the US. It is our time to truly relax and rejuvenate.

An hour before Ebo was scheduled to do his demo, my Dad called. Three days ago, he and my Mom, both newly in their 80s, had embarked on a three and a half month cruise around the world. My Dad had promised to check in with us on a regular basis. For about 10 seconds, I was thrilled to hear from him.

My mother, he told me, had been run over by a tour bus and would be medi-vac’ed to Yale New Haven Hospital’s Trauma Center within hours. The doctors in Dominica did not think her leg could be saved.

I believe my voice was calm with him as I screamed a silent  Munchian “Nooooooooooo!!!!”.  I went down to the demo kitchen and got Ebo; our kind friends at Lake Austin Spa helped get us back East. (And for the record:  despite all the years I have bitched about the airlines, Continental was wonderful about flying us to my Mom as quickly as possible.)

We landed in Newark at midnight and drove the two and a half hours to New Haven, where we sat in the family waiting area at Yale New Haven Hospital Trauma Center all through the night. Every few hours, the doc would come in and give us an update; as gruesome as the details were, each visit gave us a sliver of hope.

The sun rose and the doctor grew a mustache by the time we could finally see her. As frightening as the previous 18 hours had been, it got far, far worse. With the drugs mostly out of her system, my mother was still not lucid; the doctors were concerned they had missed a head injury. I was reeling when my mother didn’t know me or her beloved husband. (We will never live down the fact that she was able, during that dark time, to clearly name Ebo).

More tests, more waiting—our nerves were frayed. One day led to the next, with a few hours of sleep in a hotel room at some point. Surgery times were assigned and moved; there were consults with neurosurgeons and orthopedists, radiologists, hand specialists, the spine team…it was as though I was watching it all happen on a giant television screen. Another day passed and Ebo suggested we leave the hospital for a while and get a real meal somewhere. My brain ached with fatigue; my body wanted nothing more than to lie down. Still, my husband had stayed with me for every hour of this ordeal, forgoing sleep and living on the same lousy food as all of us. He had engaged my mother when I needed a break; had made me and my sisters smile when we thought we couldn’t possibly; I could accommodate this one small thing he asked.  We headed to Sally’s.

It was the same old grubby, ugly Sally’s. Maybe to the Yalies this looks like retro-cool kitsch, but I know the owners just haven’t spruced up the place in all these decades. But they haven’t changed the pies, either, and that’s a beautiful thing. There is a reason these thin crusts topped only with tomato sauce and a little grated cheese are as beloved today as they have been for nearly 80 years. (Please note: if you want mozzarella cheese on your pizza, you must order it as a topping: in other words, ask for a pie with “mootz”. )

It wasn’t until I bit in to the first slice that I remembered how much I love this pizza. Um—make that, apizza, pronounced apeetz. So I figured I ought to just take a couple of quick photos with my iPhone (I didn’t have my camera with me) in case I wanted to write about it later. My heart wasn’t in the photography, but I felt I ought to.

Then I noticed the guy at the booth behind us was taking pictures of his clam pie. Clam pizza is a real New Haven invention, so I figured I’d grab a shot of his. Now, I don’t make it a habit to photograph other people’s food at restaurants, but since he was, I thought maybe he wouldn’t mind if I took a couple of quick shots. He said it was okay, and we got to talking.

No, I said, I wasn’t from New Haven, but my family was, so I’d grown up coming to here. The three men at the table had all grown up  in Woodbridge (just outside New Haven), they said. I had spent plenty of time at my Grandmother’s country club in Woodbridge– what a coincidence!

And so it was: our families were partners for many years. His family name was a regular presence in my childhood, although by the time I was born, my grandfather had long since passed away and my grandmother had relinquished most of her interest in the business.

The three men—Ira, Sugg and Howie—were childhood friends who re-connected and met monthly at Sally’s, where they each ordered a pie; half to eat there and half to take home. They were on their 34th consecutive meeting of what they called “Sally’s Club”.  I talked with them about our families and New Haven—and most of all, about Sally’s Apizza. For a little while, I was able to escape, if only superficially, the horror of my mother’s accident. For a little while, pizza connected me—with warmth and pleasure– to these men I had never met before.

I left Sally’s buoyed up by three nice guys who will never know the good they did me that night, our surprising shared history, and the power of pizza.

Post Script: The next day at the hospital, my mother started to come back to us. She was exhausted, of course, but in her moments of wakefulness, Ebo and I told her about our experience at Sally’s. That’s when my sharp, quick thinking mother who can trounce any one in a game of Gin Rummy (and holds her own in Words with Friends)—was able to tell us all about the Shubert partners and recount names of cousins and nephews and wives and brothers… I know if I play Gin Rummy with her today I will, as always, lose.

And for the record, for those of you who know about the long-standing rivalry between Pepe’s Pizza and Sally’s Apizza in New Haven, when Ebo asked my mother which she prefers, she diplomatically answered, “Both are good”. But I will now and forever love Sally’s more. 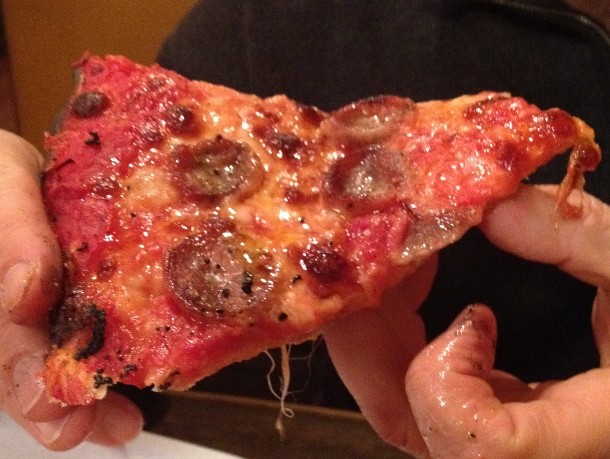