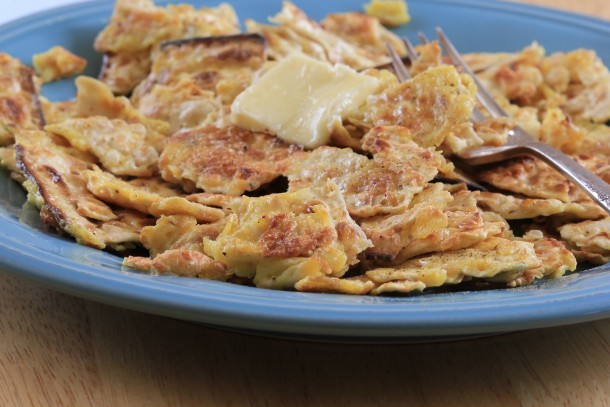 There are, of course, many ways to make matzo brei, Passover’s answer to French toast.

First, you must decide between sweet and savory. I never even knew there was such a thing as sweet matzo brei until I was an adult. And while I do agree it is tasty, I can’t help but think cinnamon sugar on matzo brei is a bit strange. I’ll stick with what I know and love. And what my Grandma Jenny told me is THE RIGHT WAY to make it.

I still clearly see the exact day she taught me. Grandma was standing in my mother’s kitchen in her pastel flowered “house dress” (she called it her schmatta, or rag) snapped all the way up the front over her girdle and slip, practical but ladylike pumps and just the right shade of coral-pink lipstick.  She directed me to take out a bowl, matzo, eggs, butter, salt and pepper, then break two eggs in the bowl and beat them with a fork. Next, take out two pieces of matzo and run them under cold water.

“Enough!,” she barked. “It’ll fall apart if you soak it too long.” I wouldn’t have called that soaking, but okay…

Now, crumble the matzo into the bowl. “Stop- you’ll make matzo meal at that rate.”  I stirred the three-inch shards with the egg, and they broke up more.

Next she had me melt the butter in a big skillet. “Add the matzo and stir. Don’t stir so much you end up with little bits, but don’t let it get too brown, either.”  She shoved her elbow into my side and as I stumbled away from the pan, she grabbed the wooden spoon from my hand. “Like this,” she said, sounding peeved at my incompetence. She moved the spoon in a perfect rhythmic pattern, gently and methodically folding the matzo over and over with a barely discernible flick of her wrist. She thrust the pepper grinder at me. “Now add salt and pepper…more pepper…that’s it– stop!” She took the pan off the heat and transferred the brei to two plates. She ordered me to set our places at the table, and we sat down.

I thought it was pretty darn good, but what I thought didn’t matter, and I knew that. So I kept eating and I waited.

Thirty years and a few minor tweaks later, here’s my version of my grandmother’s matzo brei.

1. Combine the eggs and salt in a medium bowl and beat lightly with a fork.

2. Hold each matzo under running tap water for about 30 seconds, turning it once. Break the matzo in 3-inch pieces into the eggs. Stir gently to coat the matzo evenly.

3. Heat the oil and butter in a large skillet over medium heat. (I use nonstick.) When the butter is melted, add the soaked matzo and any egg left in the bowl and cook, tossing gently until the egg is set, about 3 minutes. Stop tossing, and let the mixture get golden brown, tossing once or twice, for about 2 more minutes. Top with plenty of freshly ground pepper and serve immediately.

Previous Post: « Stir Fry Orange Chicken and Asparagus with Peanuts: Superfast and Under 300 calories
Next Post: Matzo Granola- It’s That Time of Year! »