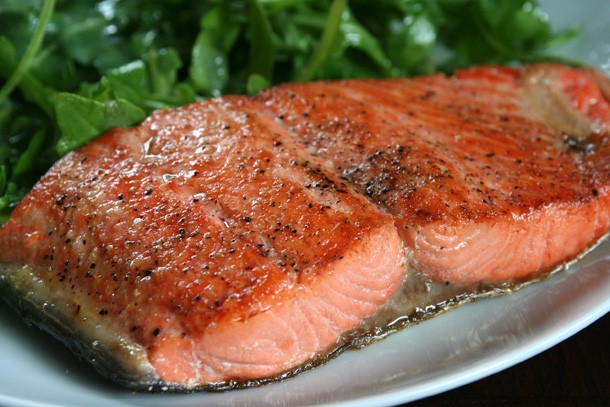 Two days ago, the salmon in that picture was swimming in the Copper River region of Alaska.

I hate to brag, but in the name of full disclosure, I simply have to: the Copper River salmon people are sending us just-caught salmon once a month during their fishing season (May to August) as part of their Flavor Sampling Program. Two years ago, they brought me, Ebo and several other journalists and chefs to the Copper River in Cordova, Alaska to watch salmon spawn, learn about the sustainable fishing program, go gill net fishing, and hang out with the fishermen. (In case you jumped to conclusions, I am not being sexist: the women I met who fish also prefer to be called fishermen, because the alternatives are too awkward).

I have been writing about wild and farmed fish for years. There is a nearly tragic misconception that all farmed fish is bad, and all wild fish is good. Neither is true– it varies by species and region. I don’t use the word “tragic” lightly: if we keep eating fish that is raised on farms that pollute the surrounding waters, or wild fish caught by methods that decimate other sea creatures along with the ocean floor, we won’t have any more fish to eat. We’re talking culinary apocalypse.

Alaskan salmon is fished in an ecologically sound, mindful way that sustains the population and allows fisherman to eke out a living.  Okay, and before we go into the kitchen (a trip that will be very brief), you should also know that Copper River salmon is as good at the table as it is for the environment. That’s a convoluted way of saying it makes good eating.

There are five types of Pacific salmon, of which sockeye is one. (King and Coho are two others you’ll be reading about here this summer). Sockeye is a beautiful deep red-orange color. The robust color is matched by its strong, but not fishy, flavor and dense, steak-like texture. It stands up well to other strong flavors (mushrooms, curry and chili peppers, for example), but because it has so much personality on its own, it is wonderful simply seasoned with salt and pepper and seared or grilled. That’s what we did for the fish in the photo above, which I just ate for lunch.

This takes less than ten minutes to make. And it is stunningly, shockingly good at this time of year, when it comes straight from the Gulf of Alaska to your local grocery store in just a day or two. You can almost feel the ocean breeze.

1. Season the salmon on top and bottom with the salt and pepper. Heat the oil in a  skillet over medium high; add the salmon skin side facing up and cook 4 minutes, or until golden and slightly crusted on the underside. Turn and cook another 3 minutes until the skin is crisp.

Tomorrow I will post another sockeye salmon recipe– one I made with Copper River sockeye I bought at the grocery store last week, before I knew this shipment was coming.